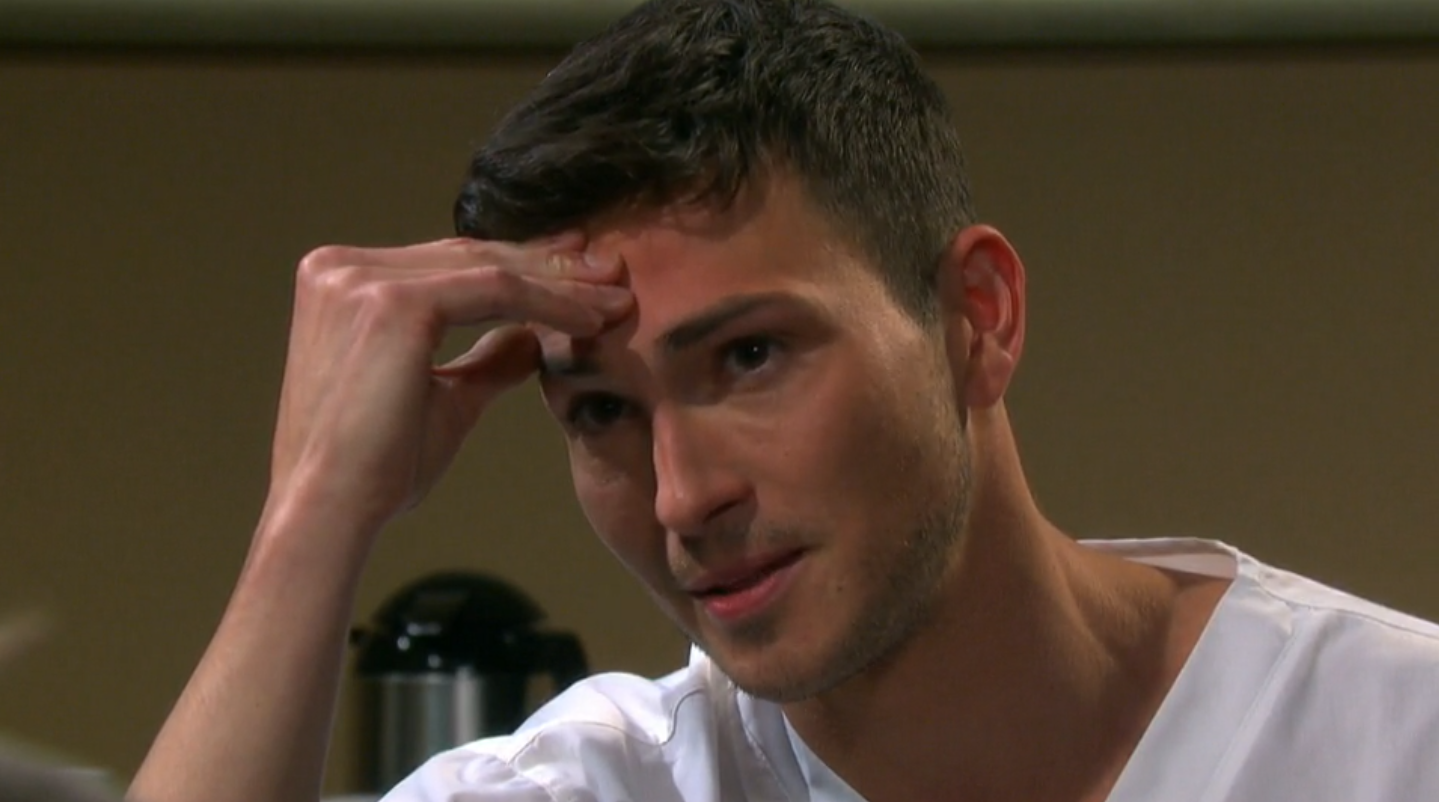 Just how was NBC’s Days of Our Lives going to bring Ben Weston (Rob Scott Wilson) back onto the canvas after he had been a necktie serial strangler?  Well, by having Dr. Marlena Evans (Deidre Hall) be the psychiatrist who evaluates him to see if there’s any reason he should not be released back into society.

In an interrogation room, Marlena is there to assess if “Killer” Ben has found his sanity.  When she speaks with him, Ben admits how sorry he is for the hurt he has caused so many people along the way.  When Marlena questions him when he realized right from wrong, he shocks her by saying it was six months ago, when her daughter, Sami (Alison Sweeney) returned to Salem, kidnapped him, and forced him to strangle Will (Chandler Massey) again.  If you recall, this plot was perpetrated by Sami, to try to shock Will into regaining his memory, since he’s been suffering from amnesia for quite some time. Ben tells Marlena, it was at that point, when he was strangling Will for a second time, that he realized the horror of what he had done.  He just couldn’t go on … he couldn’t finish the job and strangle him to death. Then Ben adds, that he realizes he’s ruined lives, and there’s no forgiveness, and that he’ll spend his life trying to make peace with what he’s done.

But later, Marlena goes for the jugular, when she takes out of her bag a folder containing headshots of those that Ben killed which included: Serena, Paige, Wendy, and the attempted murder of Will.  Ben starts to get jittery, rubbing his brow, and becoming exceedingly nervous. He calls himself a “monster.” However, when he saw that Will was alive, and found out the intel, and came back to tell everyone, (even though he ruined the double wedding of Sonny and Paul, and Chad and Abigail, as he crashed it), it changed everything for him.  He says it gives him hope. He wants a new start, and to be a “good man.” But, is Ben to be trusted?

At the end of the episode, Marlena goes to see Hope (Kristian Alfonso) and Rafe (Galen Gering) with the update about her visit with Ben.  She says, she cannot file an objection with the court, because she clearly feels he is not delusional, and he is remorseful for his crimes.  Rafe and Hope think he’s absolutely lying and manipulating her. Marlena fires back: “I can’t file the objection in good conscience” leaving Hope and Rafe stunned that Ben will be released into society, and back to Salem, where he has harmed so many people.

How great was it to see Rob Scott Wilson back as Ben?  And now to play the beats of a redemption storyline… or is it?  What will Ben’s psychological makeup actually be moving forward?  Share your thoughts on the Marlena and Ben psych eval scenes. Will he be the good man he promises her that he will be … or … will he still turn out to have that “killer” instinct?  Comment below.

I think Rob Wilson is the best young actor on daytime. I thought he was overlooked for an Emmy the year he became unhinged. I look forward to this storyline and hope to see Ciara and Ben mix it up. It will bring a new dimension to her character and get her involved in an adult storyline outside of Claire. I like Ciara with Tripp too, so it will be interesting how the story evolves. For the fans who think he can’t be redeemed, remember that EJ raped Sami and they went on to become the best couple of the… Read more »

I saw the preview of Ben and Ciara. Bo’s gorgeous rebel has found her (dark) Prince and they are the next Day’s supercouple!

Really, Karen? Wow….who woukd have “thunk”. I am floored.
Yet, I feel badly for Tripp—this will leave the door open gor Claire. Ugh!!!!!!!
This girl has the power to spin the wheels in my brain …..the cogs going haywire, everywhichway…..Do not like her or her manipulative manner…..

Juxtaposing Ben’s return with a psychiatrist deeming him fit to re-enter society with Abigail only avoiding jail time after she committed murder, due to an apparent mental illness was very smart of the writers. If viewers can except that Abby is not guilty by reason of insanity, it makes it easier to believe the same can be said for Ben. I am in no way saying their crimes are remotely similar. But it was made very clear when Ben first became a killer that he was not in his right mind.

Moreover, it’s completely ignored that if he triggered her breakdown then she could have triggered or at least contributed to
his. If she is curable, then so is he…though I have my doubts about them both.

I hope Ben is not brought back just to fool us. We already went that cycle of terrorism. It would be such a siin…..waste of THE BEST young actor on soaps……lest I forget—-soooo hooottt-everything about him is deliciously exquisite—even his shoulders. I am fascinated with very masculine, great-looking, toned, slim shoulders…..Just as Xander’s …..I am spoiled!! Yum!!
Robert, will mesmerize us—-just as Ben did pre-good guy pulling a Salem Strangler.

I wonder what Eve will think when Ben is released…he murdered Paige-her daughter!!!

Hi Celia. I’m thrilled with Robert’s return. I don’t usually go for bad boys (I’ve known too many in real life), but Ben turns me on (minus the violent bits). Robert SW is the whole package. Too bad Y&R, so desperately in need of hot guys who can act, didn’t grab him.

I think he will have everyone believe he is not the same person who committed all of those murders.I dont think he has changed one single bit,I just wonder what will happen when Abby gets back to Salem. Will this trigger off another set back, If he has changed good because it has Ben a long time since we saw the Ben from when he first arrived in Salem