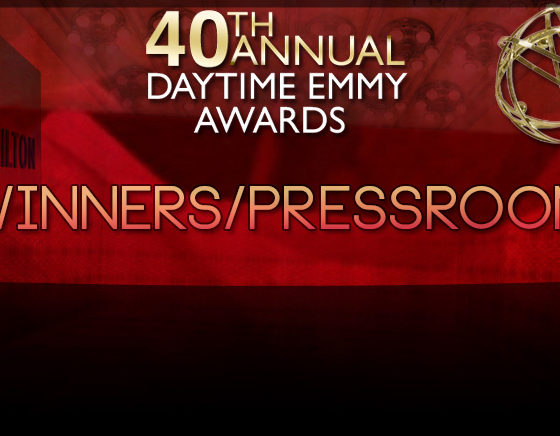 The 40th Annual Daytime Emmys have come and gone, and in the end it was Days of Our Lives shocking everyone winning for only the second time in the series history and their win since 1978 in the Outstanding Drama Series category in the finale of the telecast that aired for a second year on HLN!

The Bold and the Beautiful though, was the night’s big winner taking home gold for Outstanding Lead Actress winner, Heather Tom, for her portrayal of Katie Logan Spencer and her battle with post-partum depression. Emmy night marked the second year in a row for Tom that she won the Lead Actress prize. In her career, Heather has now won a total of five Daytime Emmys putting her just behind One Life to Live’s Erika Slezak (Viki) as the most decorated actress ever in the genre. B&B also picked up wins for Outstanding Directing Team, and Outstanding Writing Team headed up by the series executive producer and head writer, Brad Bell!

What would an Emmy night be without a tie! Well, there was one in the Outstanding Supporting Actor category! B&B’s Scott Clifton (Liam), who won his second straight Daytime Emmy but first in this category, tied with another previous winner, The Young and the Restless, Billy Miller (Billy Abbott)! And Miller’s cast mate, Doug Davidson finally won his first Daytime Emmy in his 35 year career with Y&R in the Outstanding Lead Actor in a Drama Series for his moving performance as Paul Williams in the submitted episode which is the aftermath of Paul shooting and “killing” his own son, Ricky.

Days of our Lives Chandler Massey, took home the gold for the second year in a row for the Outstanding Younger Actor in a Drama Series for Will’s coming out story, and Kristen Alderson, in her first Daytime Emmy nomination ever, won for her performance as Starr Manning for a poignant performance in an episode of General Hospital! And speaking of General Hospital, another previous winner, the recently exited Julie Marie Berman took home another piece of hardware for her mantel for her portrayal of Lulu Falconeri Spencer in the Outstanding Supporting Actress category.

On-Air On-Soaps was backstage in the One-On-One Winners/Press Room area where we were able to interview and spend some private time with the night’s big recipients. We got their initial reactions to their victory, posed some questions, and shared in their jubilation just moments after their names were called and they walked away with the prestigious gold statuette. Check our chats and special moments with newly crowned 40th annual Daytime Emmy winners: Kristen Alderson, Billy Miller, Chandler Massey, Doug Davidson, Heather Tom, Julie Marie Berman, Scott Clifton, Brad Bell and the B&B Writing Team, and Michael Stitch and the B&B Directing Team. Plus, we had the opportunity to talk to other big daytime winners of the evening including: Dr. Mehmet Oz, Ben Bailey, Mike Richards and the producing team from The Price is Right, and finally, the one and one only George Lucas who won his first Daytime Emmy in his long and decorated career.

Check out our video and photo galleries with the big winners of the 40th Annual Daytime backstage! NOTE: To see all the video and photos in their respective galleries, hit the NEXT GROUP icon to the right of the + sign in the gallery, or you can select clips and videos via the slideshow.

Below is this year’s honor roll and complete list of winners from both the Creative Arts Emmys and the 40th annual live Emmy Telecast. Congratulations to all!

Heather Tom – The Bold and the Beautiful

Doug Davidson – The Young and the Restless

Scott Clifton – The Bold and the Beautiful

Billy Miller –The Young and the Restless

Outstanding Casting For A Drama Series

Judy Blye Wilson, The Young and the Restless

Outstanding Achievement in Costume Design For A Drama Series

Danielle King, Costume Designer, The Bold and the Beautiful

Outstanding Achievement in Hairstyling For A Drama Series

Outstanding Achievement in Lighting Direction For A Drama Series (TIE)

Day of our Lives

Outstanding Achievement in Make-Up For A Drama Series

Outstanding Achievement In Music Direction And Composition For A Drama Series

“Only Love Goes On Forever” – The Young and the Restless