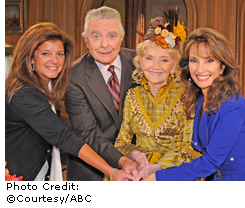 An Ad Age article made noise throughout the daytime industry today with numerous quotes and reports about the current state of daytime, and how the US current ecomony, and current automotive industry crisis has hit our beloved genre.  Here are some statements from the piece:

Susan Lucci, Ray MacDonnell and Michael E. Knight all Pine Valley stalwarts, as Erica Kane, Joe Martin and Tad Martin, respectively, have all taken substansial pay cuts.  The shows creator Agnes Nixon goes on to say that her rate has been reduced as a consultant for the series.

Brian Frons, President of Daytime for Disney-ABC Television group confirmed he has had to slash some soap stars salaries; “We like to negotiate salaries down but not out. Instead, whenever possible, when we cut costs, we aim to do it off-air, in what the audience doesn’t see.”

However, Agnes Nixon disagrees with NBC and Corday Productions decision to ax Salem Vets, Deidre Hall and Drake Hogestyn as Marlena and John in favor of younger talent. “I think they are viable businesses, but I am afraid the suits are making some big mistakes.” In reference of the Peacock Network’s decision to get rid of older characters on “DAYS”.

In the end, Brian Frons does give a bit of a good news on the November Sweeps rating for “AMC”. Seems the twisters that rocked Pine Valley, brought a 6% increase in women 18-49 over the same time last year.