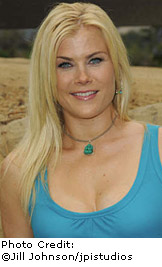 Days of our Lives, Alison Sweeney (Sami) can add another accomplishment to her ever expanding career.  MDA announced today that Sweeney is one of two entertainment industry celebrities recognized for their contributios and efforts with the non profit. Sweeney serves as an MDA Celebrity Ambassador.  Below is the official release from MDA!

Alison Sweeney and Ace Young were honored for their outstanding contributions to MDA’s battle against muscular dystrophy and related diseases. The award recognizes philanthropic contributions in the areas of corporate and organizational sponsorship, media and entertainment industry support, and personal fundraising.

MDA Chairman of the Board Dr. R. Rodney Howell presented the awards to both at the July meeting of the MDA Board of Directors in Los Angeles.

Sweeney is the host for NBC’s hit reality series The Biggest Loser and stars in the network’s award-winning daytime drama Days of our Lives. In addition to being an accomplished writer, producer and director, she serves as an MDA Celebrity Ambassador.

Young is also an MDA Celebrity Ambassador and an award-winning vocalist who released his debut CD last year. He was a contestant and finalist on the fifth season of the hit TV talent show American Idol. Young has performed as a guest on MTV’s Total Request Live, hosted a solo concert at the Pepsi Center in Denver and starred in the recent Broadway production of Grease.

“Both of these outstanding performers have something else special in common,” Howell said. “Both are MDA ambassadors who use their special communication skills to help spread the word about MDA’s dual mission of help and hope. And both of them volunteer their valuable time to serve as co-hosts of the Jerry Lewis MDA Telethon. Their unstinting philanthropy in combination with their marvelous talents has helped make the Telethon a continuing success and keep MDA high in the public consciousness.

Summer Soap Breaks hear the audio from the stars!