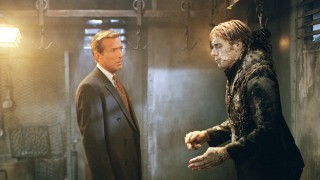 Want to countdown with All My Children as they head towards their big 4-o anniversary in two weeks?  Go to ABC.com and check out the great top 40 moments of all-time in Pine Valley.  From Erica’s modeling days, to Jesse’s death, to the Tornado episode, to Tad proposing to Dixie in a chicken suit, it’s all there.   So far numbers 40-11 have been revealed and the site promises the top ten coming up in the next week.    Here are two of our favorites;  a murdered Michael Cambias strung up on meat rack or hook or something, and bewildered Jack looking on from 2004, and of course everyone’s favorite pimp, Billy Clyde Tuggle!

Remember Estelle??? This guy drugged and manipulated poor Donna into a life of prostitution, tried to bury Estelle alive and kidnapped Dixie, and that’s just for starters.  Either way Michael Cambias and Billy Clyde were two of the darkest forces ever to hit Pine Valley, except for that little Twister, thing!

Related Topics:AMC 4oth Anniversary
Up Next

The Worthy and the Worthless- TV Guide Canada's list of 2009