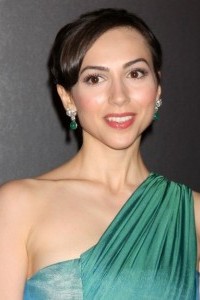 We are now less than a month away and counting down the days till the return of All My Children when it launches online at Hulu.com.  AccessHollywood.com caught up with returning favorite, Eden Riegel who is reprising her role as Bianca Montgomery to help kick-off the online revival of Pine Valley.

During the conversation,  Riegel addressed some hot topic and want-to-know questions, and was able to tease some story information which the savvy soap fan will try to detect.  Here are a few interesting excerpts below!

Riegel on where All My Children picks up after the ABC final cliffhanger, which had J.R. firing a shot from his gun at the Chandler gathering featuring many Pine Valley residents:  “By having a quick sort of fast forward you get the opportunity to restart things because things have changed a lot in these people’s lives and yet, they’re still struggling with some of the same issues, and, of course, that final cliffhanger has definitely affected — it’s ricocheted and affected people’s lives and Miranda and A.J. who were just little kids at that point are now teenagers and dealing with the fallout themselves. So I think it was a really, really smart move to do this time jump because then you just get so many more possibilities. You don’t have to quickly rehash and finish up old stories. You get to start fresh with the same people, but at a slightly different point in their lives.”

Riegel on if the reboot explains the absence of Eden’s on-screen mother Erica Kane, played by Susan Lucci:  “No. I think in a good way… there isn’t a lot of time on like, ‘Oh, where’s so and so?’ ‘You remember she’s out of town doing this…’ They don’t spend a lot of time on the exposition of that stuff so what you end up getting is the feeling that those people still are present. They’re just not featured. And soap audiences are used to there being a large cast and not every storyline can be dealt with every day so, it doesn’t have to be mentioned that Erica’s at the nail salon today. So I don’t know if it’s specifically mentioned where she is or what she’s doing… I don’t think that her absence is gonna be quite as palpable for the audience, which is good because I’m sure they’re gonna miss her enough and they can sort of believe that she is present.”

Riegel on if there is romance this time around for Bianca:  “They’re being very secretive and I can’t reveal anything and some of it has to do with — Bianca was very affected by what happened at the end of the show — the big cliffhanger and her family is very affected by it, so if I tell you what’s going on with her romantically, it’s a big reveal.”

So soapers, how do you think AMC will pick up five years later after the shot was fired? How was Bianca affected by what happened at the end of the last episode of AMC on ABC?  What do you think about not addressing where Erica is? Smart move?  Share your thoughts!

Really excited to see Eden as Bianca and what new paths she will take. I guess this five years ahead angle will be alright. Where is Erica, anyway? Shooting movies as shown on the finale?

I really think it’s, for the best! It would be too difficult to pick up right where they left off. I just can’t wait to see how it all unfolds. April 29th can’t get here fast enough!

IF the shooting affected Bianca in some way, it seems perhaps it involves Erica? Maybe she could also be off somewhere with Jackson? If Erica is ever needed for storyline purposes and Susan isnt available, id bring back Anna Stuart in the part. She does resemble Lucci in some ways and her acting style is the same, so i feel AS would be the perfect recast. Same 4 Tad…James Depaiva ex Max OLTL could pass as Tad. But i feel in the beginning there are no immediate plans to use those characters, and like Dallas not needing Pam or Rays… Read more »

I absolutely LOVE Anna Stuart! Loved her on Another World, loved her when she came to AMC. But, replace Susan Lucci and play Erica Kane? No way. There’s only one person for that role, and that’s why they’re not recasting…

I couldnt imagine replacing Lucci in the iconic role of Erica that made her famous, but if its ever needed and Anna is available shes the only one i feel close enough to play the role. She was kinda like Erica on AW. Ive liked her since she was Toni on The Doctors and she also played Gina on GH during the late 70s.

Anna Stuart was classic years ago on Another World among others….. HOWEVER as a viewer of AMC since Erica was in High School……
NO ONE can or should ever replace Susan Lucci as Erica Kane……. if Ms. Lucci does not chose to come back then Erica shall remain off camera or killed off….. No one else can EVER be ERICA KANE ! Case closed…

I meant that as a ‘temp’ recast if Erica was needed and Susan wasnt avaiable…kinda like they did for Erika Slezak as Viki on OLTL when they needed a temp for Viki when Christine Jones filled in for her years ago!

I am sure they are leaving the Erica story blank in hopes that Susan Lucci will return when she see’s how this new media will play out. I am praying for the show to be a success. I miss it so much, I don’t care how it starts out, I just want it to begin already. Good luck to everyone involved in putting this show back up from cast to crew, from writers, to producers, directors, and everyone else in-between.

Knowing Susan Lucci has other commitments – I am fine with them leaving it open. I know she will work her schedule out and show up in Pine Valley.
I am also not worried about the changes. I am confident they will do Pine Valley justice. With Agnes Nixon consulting, I can’t see it any other way!
SO looking forward to 4/29/13!!! 🙂

I’m betting JR shot Marissa. It would help continue that on again off again feud with not only the Kane women, but Zach as well as David. Who’ll probably blame him for both his daughter’s death. Gives AJ reason to hate his father. Continuing on with that Chandler men family drama. I know it’s just wild guessing, but I’m sooooo freaking excited about these reboots. And though I’m one who is still struggling really seeing Pine Valley with no Erika Kane on a regular basis, it’s probably best they aren’t spending a lot of time on where exactly all the… Read more »

It seems as if Marissa isn’t going to be in Pine Valley and won’t be with Bianca, and that makes me happy purely because of Eden in the role. I’m sure they’ll bring Reese back either with Tamara Braun or a new actress, or just create a new love interest for her.

I just wish Christina Bennett Lind and Sarah Glendening were returning together!