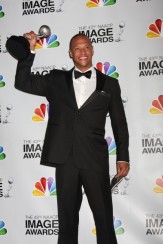 Last night on NBC, the 43rd Annual NAACP Image Awards were doled out for with honors in motion pictures, television, recording, and literature.  And in the two acting categories for Daytime Dramas, All My Children’s Emerson Brooks, who played Ben, who helped keep Erica Kane kidnapped during the Jane doppelganger storyline and once again, The Young and the Restless‘ recurring guest star, Tatyana Ali (Roxanne) took away the Best Actor and Best Actress prize, respectively.

In a year that confused voters and soap pundits with the absence of AMC’s then Debbi Morgan and Darnell Williams, who had a banner year, many of the five nominees seemed a bit of a stretch. However, Emerson’s website detailed his performance pretty spot-on,  ” For four months, Emerson Brooks starred on All My Children as Ben aka “The Man in Black.“ His performance was hailed by critics and fans for being  ”moving“ and  ”superbly acted.“ Ben’s story was the journey of a man whose personal guilt, due to the accidental death of a stranger’s child, led him to become involved in events that quickly spiraled out of his control. Ben assisted the child’s mother, Jane, in an attempt to hijack the life of Erica Kane; both roles played by Susan Lucci.

During the months Ben held Erica captive, they bonded emotionally giving each other the opportunity to see the world through each other’s eyes and for both to heal in their own way. For Ben, it was the realization of his true value and the value of forgiving oneself.  For Erica, it was a greater appreciation for her life, family and the experiences that made her who she is today.”

So, what do you think of the soap acting winners? Let us know! And for a complete list of last night’s 43rd Annual Image Award winners click here!

RATINGS: GH Hits New Lows in Total Viewers! But, Help is on the Way!

Tatyana Ali is never on Y&R, so how did she win best actress? What about Debbi Morgan and the young woman from B&B?

All of those awards are rigged!!!!

Don’t mean to sound like a dope, but I don’t even know who Emerson Brooks is….and I don’t remember his character. And like stated before, Tatyana is hardly ever on Y&R, so how did these two win? I mean I don’t begrudge them this award….Happy for them, but I believe there were much more deserving people for these awards. Debbi Morgan or Darnell Williiams for their contributions at AMC, Tonye Patano (Phylicia Evans OLTL) for how she dealt with Destiny’s pregnancy with Nora, or even Shaun & Destiny for their contributions on OLTL…..Renee Jones (Lexie Carver on DOOL), or the… Read more »