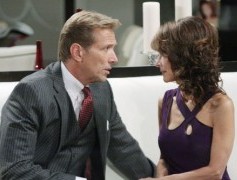 Jackson Montgomery will finally, finally get a clue, that there is something more than just business partnership, or friendship between Caleb and his gal Erica very shortly on All My Children.  Actor, Walt Willey, who has played Jack for decades, will find these two in quite the embrace on the upcoming February 1st episode.

In the meantime, TV Guide caught up with this Pine Valley veteran to get  his thoughts on this triangle, which according to Willey, could be a quadrangle!  Here are some excerpts below.

Willey on Jack being a bit of doofus on figuring out that there is a spark between Caleb and Erica:  “Hey, watch out there! [Laughs] Jack may be dumb but he’s definitely slow. Most people, even unconscious ones, would have seen something’s up with Caleb and Erica a hell of a long time before this.”

Willey on the upcoming triangle which by all appearances looks like he is the odd-man out:  “Well, it ain’t over yet! And, actually, now that Krystal is involved, it’s really more like a big, sloppy, sharply pointed quadrangle. If you look at any of the polls, the fans really want to see Jack and Erica together but the writers don’t seem to come up with a story for them as a couple. They’re Moonlighting, they’re Nick and Nora, as clever and funny as can be, but it’s always the Sturm und Drang that carries us away.”

I’m tired of this “pro-Jerica” rant. How boring is that?? Erica is a beautiful, desirable woman; why should she stay with only one man? I love the Caleb/Erica pairing. The actors also know that a storyline of marriage to one person is the kiss of doom;everybody’s just gets bored except some housewife. What can you do with that? Show them at dinner, at a party, in bed. Ho hum. As for Caleb, it’s been commented he is “haughty and acts mad, not friendly”. Hello. That’s the character he was HIRED to play. He just came back into society after decades.… Read more »