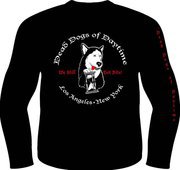 Leave it to soap veteran and one of the funniest men we know, Walt Willey (Jackson Montgomery) of All My Children to come up with something original, timely, and apropos!  Willey is set to launch hopefully on July 4th his new Dead Dogs of Daytime T-Shirts and other collectibles.  But here is the story from Willey, or as he says The Origin of Dead Dogs of Daytime on how this hilarious themed tee came into being that had us applauding!

Willey: “Here’s a good one, folks. An acquaintance of mine tells me that they were recently in the company of a network executive who – when someone commented about the viability of actors who ply their craft on soaps – reportedly said: “Maybe, but any actor on a soap now is a dead dog.” Hmmm.  I always thought the phrase was “dead duck”.  And by the way, the definition of a “dead duck’ is: “a person or thing doomed to death, failure, etc., especially because of a mistake or misjudgment.” And our mistake, our misjudgment, was what? Working on the shows we all love?  Now there’s a vote of confidence and a show of appreciation and gratitude.  Nice!

So I decided to design a T-shirt to immortalize this network exec’s words and to honor us; the ACTORS, WRITERS, CREW, PRODUCTION STAFF, and DEPARTMENT HEADS of Daytime Drama.  But most importantly, to honor YOU, the most loyal, most loving, most there-when-you-need-them-fighting-against-all-odds SOAP FANS!  Indeed, to honor all of us, the supposed “Dead Dogs of Daytime”.  Because baby, WE STILL GOT BITE!”

We love this! And Walt taking a stance.  The website, according to Willey, where you can find all the Dead Dogs of Daytime merchandise is deaddogsofdaytime.com, which should be operational by 7/4 with Shirts, tanks, hoodies, cozies, stickers, and more.

The shirts look great! Someone snap this guy up!! From what I hear they never appreciated his talent on AMC ! I will be ordering!

I Love Walt Willey & I only viewed AMC a few times because I watched “Days” and in LA they are basically on same time, but AMC is a great show and my BFF favorite soap. Walt is a talented & funny man I really love this shirt. You didn’t give us any info. though WHERE CAN I ORDER ONE OF THIS SHIRTS??

I am still holding out hope that AMC & OLTL can be saved somehow.
LONG LIVE SOAPS!!! Luv, A Fan of ALL SOAPS!!

Opps my Bad, I just re-read your article & found the info. for –

Thanks!!! 4Ever Soap Fan