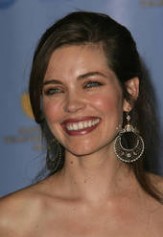 The Young and the Restless is keeping their Victoria Newman. Word from CBS Soaps In Depth is that actress, Amelia Heinle (Victoria) is staying put at the number one CBS soap, as she just signed a brand new contract.

Heinle was glad the deal worked out telling Soaps In Depth, “I’m happy here. The people are good here. I can’t believe I’ve been here for six years!”

Look for a brand new interview at On-Air On-Soaps late next week with Amelia Heinle and her co-star Billy Miller (Billy).

You Go Girl! You are one of the reasons the show’s so great! Congratulations!

uuugh! REALLY?!?!? Amelia’s version of Victoria is so bland, vanilla and uninteresting compared to how Heather Tom interpreted the character with range, emotion and depth. Now, part of the problem is the material that’s been generated…but even when the script calls for range and depth and emotion, we don’t get it. Amelia’s Victoria has clearly improved after being paired with Billy…but it’s only a fraction of the character I once really enjoyed.

I’m so happy she’s staying! She and Marcy are my fave female actresses on the show. I’m so happy for her.

I really like Amelia. I really loved her and Billy together. They brighten the show up, it has been so dark lately.

I THINK SHE IS THE SEXIEST GAL ON THE SHOW!I WISH I COULD SEE MORE OF HER?