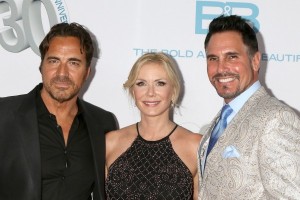 The stars of The Bold and the Beautiful celebrated the series 30th anniversary with a very exclusive party held in downtown Los Angeles at the hotspot Clifton’s Cafeteria.

Cast members past and present, and producers, writers, and behind the scenes personnel were on hand to honor the milestone of the CBS daytime drama series created by the late William J. Bell and Lee Phillip Bell. Prior to the soiree, the cast past and present took to the red carpet where paparazzi and reporters were waiting to snap some memorable images from the night and talk to The Bold and the Beautiful notables. 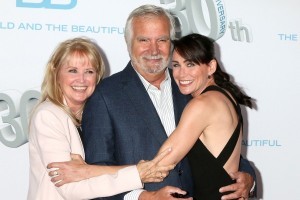 Thorsten Kaye (Ridge) brought along his daughter Marla, Katherine Kelly Lang (Brooke) was with her beau, Don Zoida, Don Diamont (Bill) had his lovely wife Cindy Ambuehl by his side, as did John McCook (Eric) who brought the love of his life, Laurette Spang-McCook, and Rena Sofer (Quinn) took to the red carpet, and was as stunning as ever.

On-Air On-Soaps Michael Fairman chatted it up in some of the attendees in these very candid, fun and special video interviews. Here we share part one spotlighting our conversations with Thorsten, Rena, Katherine, Don and John.

Watch them after the jump, and then let us know which was your favorite!

Happy 44th Anniversary To The Young and the Restless!