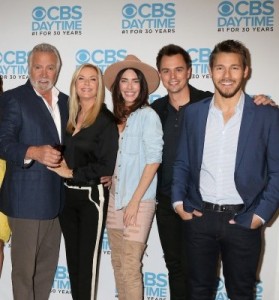 The Bold and the Beautiful is about to jump start the festivities for its upcoming 30th anniversary milestone in 2017 with a very special appearance in this Sunday’s (November 27) 85th Annual Hollywood Christmas Parade.

In addition, soap fans can look for Days of our Lives stars Deidre Hall, Marci Miller, Martha Madison and Camila Banus, plus The Young and the Restless,  Camryn Grimes, Christian Le Blanc and Kate Linder to appear on the parade route.

The 85th Annual Hollywood Christmas Paradewill premiere as a two-hour primetime special on The CW Network on Friday, December 16, 2016 at 8:00 p.m. ET/PT (7:00 p.m. CT) repeating on Hallmark Movies & Mysteries channel on Wednesday, December 21, 2106 at 3:00 p.m. ET/PT (2:00 p.m. CT). The parade will also air to more than one million American servicemen and women worldwide on the American Forces Network.

So, will you be checking out some of your favorite soap stars in the annual Xmas parade festivities?  Ready for B&B to have it’s big 3-0 next March? Comment below!

The Bay Season Two Coming Your Way On Amazon Prime!

I love B&B. I am ready to see more Caroline and Thomas. John McCook and Rena Sofer are amazing. Heather Tom is the best actress on daytime. Katherine Kelly Lang needs an Emmy nomination.

I hear you Ray. Loving B&B right now as well. I am getting use to Thomas and Caroline. I actually liked Caroline better with Ridge believe it or not. That was before they turned Ridge into the pompus ass he is now. Katherine Kelly Lang is long overdue for an Emmy. She had some wonderful scenes with Katie over the summer when Brooke and Katie were fighting over Bill. That one scene when she practically collapsed on the floor sobbing after Katie gave her the kiss off was excellent. Now that Katie is living next door, I hope they don’t… Read more »

It’s just down the street more or less but I’m not about to fight that crowd just to watch waving stars pass by..I’ve met Caroline Brady..marlena..got to take louise sorrell on a building tour..met and chatted with Quinn and Katie..watched Brooke filming scenes till it got BORING..after a while you’re so used to seeing people out here it’s like meh..I’m good. Lol.

I’ll try and catch it on TV.