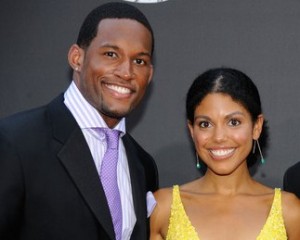 Now here’s a clever idea!  The Bold and the Beautiful’s fictional web series Room 8 which stars the characters of Carter and Maya is moving to the web for real!

And apparently it was in the plans all along when bringing former Guiding Light stars, Lawrence Saint-Victor (Carter)  and Karla Mosley (Maya) on to the canvas of the CBS soap.  As many fans know, Lawrence and Karla also created and starred in their own web series called Wed-Locked after CBS axed GL!

The version of Room 8 that will go to the web and launch on August 8th is the original vision of Rafael’s on B&B, before Caroline got her claws into the concept!  Fans can find it at Room8TheSeries.com!

According to TV Guide Magazine, Saint-Victor, who is writing and producing the online version of Room 8 with Mosley, related the back-story on how this all came about: “When we were hired at B&B, Brad Bell asked us a lot of questions about Wed-Locked — how we created it, how we shot it — and that in a way became the inspiration for Room 8!”

Mosley added: “Brad gave us a lot of creative freedom with this. Like the version of Room 8 you’ve seen on B&B, this one starts with Lance and Scarlett meeting and moving in together, and Brad had a great idea for the final episode. So, basically, we were given the bookends and the rest was up to us.”

This is the first time a network soap has taken a story arc and turned it into a separate series for the Internet,” notes Mosley. “It’s a really exciting experiment and we’re eager to see how it’s received. The most wonderful thing about new media is that it’s new. The possibilities are endless!”

So what do you think of the concept of Room 8? Will you be checking out the series?  Comment below!

Colby Shows A Sensitive Side On This Week's All My Children! What Did You Think Of Brooke Newton's Performance?

Michael, don’t forget that CBS already did a webseries that integrated storylines on THREE soap operas. Remember, it starred Amber from B&B and Y&R and also Alison Stewart from As the World Turns. Then Emily Stewart crossed over to Y&R as a part of this storyline. Really excited about Room 8, but surprised nobody is mentioning the first time they did this.

It says that in the article. Wed-Locked.

Great idea, u have the right two actors in this!

Doesn’t interest me at all.

I will give it a try as I like to support any new online soap venture.