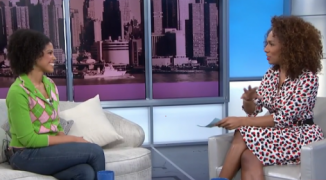 In an intriguing conversation, Mosley is put to the test by Mock, and the questions she pulled from fans who wanted to know more about how The Bold and the Beautiful and Mosley intend to do justice and tell Maya’s story.

Mosley also did address the plot point from a few years back where Maya was supposed to have had a baby and as Karla explains it,  it does, “connect the dots” for her.  Addressing the issues, and concerns, and excited about the future of this story, plus telling Mock that B&B will bring on transgender actors and characters to fill in and help round out the story made for an interesting chat.

Watch Karla and Janet discuss the secret story bombshell that has everyone talking after the jump.  Then, let us know if you are exciting to see Maya’s journey, the conflict with the character on the CBS daytime drama series, and if you hope she comes out of all of this an even stronger woman who isn’t afraid to share her truth.

READ MORE
Nathan Fillion Talks His Start On OLTL On 'The View' With Whoopi Goldberg
Related Topics:cbsJanet MockKarla MosleyMaya AvantMSNBCSo PopularThe Bold and the Beautiful
Up Next

It's Confirmed: Downton Abbey's Sixth Season To Be Its Last!

Enjoyed this peek into the storyline and i really thought that was a woman she was talking to and not a transgendered male who really is a woman now….but @MichaelFairman…thank goodness i have cable and MSNBC because that video above was taking FOREVER to load..and it’s STILL trying to LOL…and you introduced me to that part of MSNBC because it’s certainly not on demand but i will be checking it out every now and then…so ….THANKS!!

Quite honestly this is a subject I wasn’t very familiar with. But from what I can see Karla and the writers are handling it with great sensitivity instead of cliches you might see coming out of certain segments of society or pop culture. But the threat of prejudice is still there since Maya’s sister is holding the secret over Maya’s head.

I must admit I think Dustin Hoffman in Tootsie (coincidentally a soap opera setting) and Jack Lemmon in Some Like It Hot, both dressing up and pretending to be women, was amusing. I was just naive enough to not realize this is real life for some people.

Here’s a little trivia: the very first transgender soap character appeared in the 1970s on the very shortlived syndicated serial ‘All That Glitters’ and played by a pre-Dallas Linda Grey! To see a very realistically written soap opera transgender character and the problems she faced when people found out and with discrimination google Hayley Cropper of the British soap Coronation Street— tptb at B&B want to do a powerful, well done transgender storyline need to read the Hayley Cropper struggle for acceptance in a world of hate and discrimination!!!

Absobloodylutely, jimh! Our Hayley was brilliant and I do hope those at B&B take the time to study her story!
BTW…you mentioned a chat site for Corrie. I have been looking for you and cannot seem to find it. Would you mind sharing so we can possibly have a good natter about Corrie some time?
I will have to look up ‘ALL THAT GLITTERS’. I remember the title but have never seen the programme. I adore Linda Grey!
Cheers and best regards X

Its Corrie.net The Coronation Street fan website….i sent this before but i dont know if you got it or not—it didnt appear when i replied…hope you find it—its great!!!

Hiya m8! jimh…just wanted you to know that I left a ‘hello’ message to you on Corrie.net a bit ago. Hope you see it! I forgot about the chat portion of Corrie.net. I have been there before reading up on some of the classic episodes from the past from time to time. Take care! Cheers! Eden X

I must apologize but I now feel I am too old for soaps. The transgender issue isn’t the problem for me. It’s the fact that Maya has never told Rick and I just can’t stand the sister. My own sister and myself have been thru some pretty rough times but this blackmail thing is way over the line. I’m also way way over Brooke and her problems and coming between Deacon and Quinn (not that I have any great love for either of them) but whatever Brooke gets out of interfering in one relationship too many is well deserved. I must admit for the past week I have been fast forwarding thru most of the show. I hope they (the writers) don’t break up Ridge and Caroline as she is way too good for Rick. No matter what Ridge has done before I would hate to see him back with Brooke.