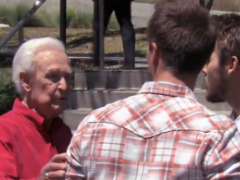 Now this is a classic film moment, and being “soapified” on the August 28th episode of CBS’ The Bold and the Beautiful, when the former host of The Price is Right and animal activist, Bob Barker returns to the soap preaching his important message about the pet population!

While the Spencer brothers Liam (Scott Clifton) and Wyatt (Darin Brooks) are having a discussion, they run into Barker who is getting no respect from a mouthing off Wyatt!  In fact, Wyatt is down right demeaning to Barker and his animal platitudes!

TV Guide Magazine’s Michael Logan got the skinny from Barker that this whole scene is a takeoff on his classic fight with Adam Sandler in the 1996 movie Happy Gilmore!  Here are a few excerpts below!

Barker on being 90-years-old and in a fight scene with a younger man: “Well, first I had to have a talk with Darin, the actor I knocked around.  I said, “Just so we’re clear, young man, it does not say in the script that you hit back. We got that?” I win all my fights. That’s because they’re fixed!”

Barker on making another soap opera appearance to B&B:  “You want to call me a soap star? Hey, at my age, I’ll take it! I’m grateful for whatever comes my way, especially when I can get out my message about the importance of spaying and neutering animals. CBS and B&B exec producer Brad Bell have been incredible about using the soap to increase awareness. And if I get a chance to punch out a guy who thinks animal lovers are stupid wackos, even better!”

Watch Wyatt get punched out by Bob after the jump! Then let us know if you got a tickle out of the scene?

Teresa Castillo Chats On Her Return To GH & If There Is Any Future For Patrick and Sabrina!

ITA. Love BBarker and his zeal for animals but that scene is stupid.

It was great to see Bob on TV again. He looks great. But they could have done him better. The pet thing is soooo old. I agree it is the dumbest thing I’ve seen on BB, today. They have had much dumber. BB is so awful it makes me want to go all Barker on my TV. lol And IMO Liam (Scott Clifton) is one of the worst actors ever. I’ve had the displeasure to see him on other shows like OLTL, and he just gets worse. I don’t know how he gets work. Why do those two seemingly intelligent… Read more »

yes it was funny, just wish it was Liam smacking him around!!!

hahahahaha!!!! Loved that scene in Happy Gilmore. This will be hiliarious

LOL why was this even necessary??? Just outright goofy.

B&B has lost its way in many fronts. Tho there is some nugget of excitement in the daytime drama, I just am not engaged anymore. No one does anything! And if they do, it is all about love and attraction and knee-jerk plotting without development or suspense. Yawn!

Is Brooke going to be pregnant again?

That was a fun scene, but did it have to get physical.