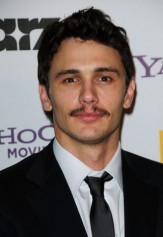 James Franco just keeps surprising soap and film fans around the world with his choices, but we have to say Franco is on a hot streak! TV Guide has revealed exclusively today that the just named co-host of the 83rd Annual Academy Awards, and a shoo-in for a nomination for his new film, 127 Hours, is headed back on-screen around on Oscar time to General Hospital!

According to TV Guide, “Franco, who twice appeared on the ABC soap as a serial killer, has agreed to return for a two-episode stint airing the Friday before the Oscar telecast and the day after. It’ll serve as a teaser for a longer story arc he plans to do on the serial later in 2011. ”

Apparently credit goes to GH executive producer, Jill Farren Phelps for coming up with a plan to get him back on the top ABC soap. Phelps told TV Guide, “When we realized James would be in L.A. for the Oscars and all the other awards shows, we asked if he’d consider coming back and doing a little something for us. He was happy to do it and requested that we use the appearance to plug his next story. He’s also expressed an interest in directing at GH. He’s been really, really good to us. Whatever James wants, we’d love to make it happen!  Franco will remind Jason and the audience that he’s still out there. We just haven’t seen or heard from him because he’s been terribly busy.”

And, if you didn’t catch James Franco’s appearance last night on the debut of  his interview on Bravo’s, Inside the Actor’s Studio, it’s a must-see.  Make sure to check for times for the repeat.  For more Franco, check out On-Air On-Soaps interview with the superstar during his last return this summer  as the “artist whose canvas is murder” to Port Charles here!

Add a B&B Eric & Stephanie Ornament to your Christmas tree!