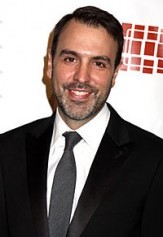 Fantastic news late today out of Prospect Park!  One Life to Live’s head writer, Ron Carlivati has agreed to stay on with the series when it moves online in January 2012 to its new home on The Online Network! (TOLN.com)

Prospect Park Statement: Rich Frank and Jeff Kwatinetz of TOLN have confirmed today that a deal is in place for One Life to Live Emmy winning Head Writer and Consulting Producer Ron Carlivati, subject to a WGA agreement, to continue with the show when it moves online at the beginning of next year. Carlivati has been with the show since 1996 and a head writer since 2007.

So ,what do you think of the news of Carlivati staying put and the rest of the cast confirmation pending final agreements with the WGA and AFTRA? We think things are looking awfully good for One Life to Live in its new home!

DAYS Arianne Zuker Interview: Will Nicole find love with EJ? Someone else? Or, Self-Destruct?

Yay!!! This is great news. Now I don’t have to worry about who will be leading the HW position over at OLTL….. We all have our gripes about different story lines, but I think OLTL has never been better. I will just be thrilled to see Trevor St. John, Bree Williamson, Florencia Lozano, Robin Strasser, Robert S. Woods, Hillary B. Smith…..and I would be over the moon, if OLTL would get Cathryn Hickland back!!!

Thanks for all the headsup and news. Great job. 🙂

NOONE in Llanview, Pennsylvania, has more rightly and publicly praised the talents and artistic prowess, and extraordinary accomplishments of Messrs. Frank Valentini and Ron Carlivati than the great current United States Senator, Dorian Cramer Lord. Senator Lord, who many of us know left the position as Mayor of Llanview, Pennsylvania, because her country called her to public service in our Nation’s Capital (and who in past months, thus early departed OLTL, due to her then chronic back pain). But, the actress Ms. Strasser is fully recuperated now, and it is time PROSPECT PARK and TOLN. It is time for the… Read more »

Thanks to the universe for this news, and i’m so glad he wont be writing for GH. so i don’t have to worry about mother and daughter w/ split personality, twins who share the same lovers, and a trio of siblings walking around naked all the time.

Great news for OLTL fans. I am waiting for Todd, Tea, Bo, Nora and Jessica to sign on. If PP wants to do this right, they would be negogiating with Robin Strasser as we speak. I cant wait to see who else will come aboard.

The Gods are listening…a hearty thank you to Prospect Park…Me and Mom will both be watching, with all of these new additions….keep the rest of the cast coming! I hope Brian Frons is crying in his coffee every day.

Here Here!!! I wholeheartedly agree!!!! We are soap fans and we are proud and loyal to the charecters and the actors portraying them. Long live One Life to Live and All My Children!

So glad Frank will continue writing for OLTL!!!! Happy that he’s not going to GH instead. Suck on that Frons! I’m glad to see a lot of actors following over. I hope Dorian and Roxy come also. I hope Delphina will always be on the show (she cracks me up!). Victor needs to come back from the dead and fight with (and sometimes work with) Todd. And I agree that Catherine Hickman can come back as Lindsey. Hopefully with not having Frons and ABC breathing down their necks the show can do so much more and bring back people they… Read more »

I hope they can also find a home on a cable station so everyone can continue to enjoy it! And please bring back Victor!

please get roger howarth to sign on.don’t bring back victor let roger claim his family back as the real todd m.

Ron is a brilliant writer and i am over-the-moon that he will be staying on w/ OLTL. THANKS R.C.