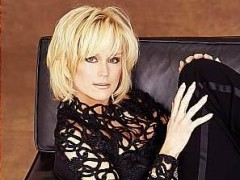 Soap fans are in for a real treat on next week’s One Life to Live when the Statesville prison break takes front and center stage depositing some of the show’s greatest all-time baddies smack dab in front of, and causing havoc for, some of the major citizens of Llanview! Among them, the fantastic Catherine Hickland as Lindsay Rappaport who  is back, and whose long running feud with Nora Buchanan is soap-legendary!

Hickland spoke with TV Guide to reveal some details on her return, and for sticking up for the fans right after and through the gut-wrenching cancellation and decision by ABC to rid the daytime line-up of two landmark shows: All My Children, and One Life to Live.   Here are a few excerpts below!

Catherine on how Lindsay makes a beeline to former flame Bo Buchanan after the prison break:  “It’s sort of ambiguous. I’m not being coy. I really couldn’t tell from the script. But, yeah, I got to work with Bob and Hillary B. Smith [Nora] and Ty Treadway a bit. For me, it was a satisfying ending for my character. I liked the idea of playing Lindsay one more time. That character has a place in history on that show, that’s for sure. Though, at that point, Prospect Park was still planning to take the show to the Internet. I was happy to wrap it up, or leave it open. Whatever they had in mind.”

Catherine on being so vocal on her blog and throughout the devastating news of the cancellations of AMC & OLTL, and taking part in the picket lines:  ” I was happy to be out there! I didn’t really care if I ever acted again so, for me, it was no big deal. Everyone else at OLTL and AMC was under gag order and had the fear of God put into them. There was nothing keeping me from telling the truth.  When I saw our wonderful viewers being yanked around like that I just couldn’t take it anymore. They are the bread and butter of this business, the very reason soaps have remained on the air for decades, and they deserved to know what’s really going on. I guess that was the reason behind my snap, so to speak. I just didn’t have any idea it would be so far reaching and cause such a fuss. I was just saying my thoughts, blogging like I have for ages. I spent a lot of years at OLTL being told, “Don’t say this. Don’t say that.” This is America, may I remind everybody. To not be able to speak your mind is very frustrating. If you don’t let your feelings out, that’s where sickness lies. I had already moved on. It’s not like I felt anyone owed me a career. It wasn’t about that at all. I just felt that the audience was owed simple respect, something we all owe each other — in business and in life.”

Are you excited to see Catherine as Lindsay for an encore performance next week?  Let us know!

Details On Ian Buchanan's new role on Days of our Lives!

You go girl! Thank you for sticking up for us OLTL fans. I can’t wait to see your return as Lidnsey. I am hoping you and Nora have one more classic cat fight.

Looking forward to seeing you Catherine. I appreciate your openess and sticking up for the fans. Along with being heartbroken has come the frustration of not hearing what is really going on. It was very obvious there was a gag order in place and of cousre I understand the pressure many must have felt. Still I appreciate hearing your thoughts on the potential (have not given up) ending of our soaps.

I love Catherine Hickland! She has spunk and tells it like it is. I can’t wait to see her episodes!

I am sooooo looking forward to seeing Catherine as Lindsay on OLTL next week! Yay!! 😀 😀

Love her! Can’t wait to see Lindsey again! And I pray she and Nora have it out one last time!!!

Can’t wait to see her too! What is up with this awful ticker ticking down the time left for the show! This is very stressful & depressing to me. What is the point of it?

forget the ticker ,on monday they are playing a repeat or its not on at all.that means we only have 10 more days of new shows ,cant wait to see lindsay hope she and nora have a few words to say to each other.but its only bringing us closer to the end.

I’m trying to figure that out myself. 2 weeks ago, and on this site (comb the site and you will see the write up about prospect park looking for investor’s out of the country…. I haven’t heard anything since, and that was on this site 2 weeks ago… Every other day, I am checking in with this site and checking in on the internet trying to find out the update… People are moving on. Maybe folk are tire. Keep me posted if you here any anything as well.

The soaps are off for good! The phoney deal fell through. ABC owes us two 2 hours movies, one for each show, to end the shows right!

The deal fell through so the soaps won’t be coming back! I think the whole thing was a fake to begin with! ABC owes us two 2 hour daytime movies, one for each show, to end them right! Thanks for everything Catherine!

I loved Lindsey Rappaport. Catherine is cor rect. She does have a place in History on that show. I didn’t think she would last very long on that show, BC it was evident that Bo and Nora would be a couple that the show couldn’t break up forever….. and THEN, what would Lindsey do? Lindsey lasted ALONG time on that show BC she was so DAMN good.

Welcome back Lindsay! Glad to see you back on OLTL.