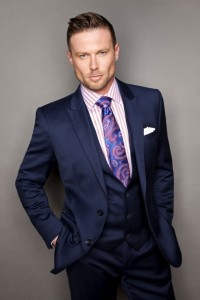 On this Thanksgiving holiday, CBS.com has put together something to be thankful for!  Yup, it’s their countdown of the 22 dreamiest daytime guys, ranked from most available to least available!

So which CBS Daytime character do you think is the dreamiest? Who do you think would be the most available and open to dating or a relationship?

How many are so hung up on other women there is no way anyone else could turn their head? Who has a roving-eyes? Who is MIA from this list?  Check out the gallery and then let us know your thoughts below!

The Bold and the Beautiful's Katherine Kelly Lang To Guest Star On Iconic Australian Soap NEIGHBOURS!

Ridge Forrester as played by the gorgeous Thorsten Kaye!

This is fine, but I strongly suspect that a comparable list of dreamy females would be considered sexist and inappropriate. While the term “hunk” is acceptable for male stars I’m afraid we heterosexual male soap fans would not be tolerated if using a female equivalent. Babe? Hottie?? Dreamiest female characters anyone?

OMG This is the type of crap that starts a war

Not my intention – just a casual observation. No war please.

Why would that start a war? Wasnt there a poll of sorts awhile back about the prettiest woman
on Y and R? Don’t remember exactly when, but I think Avery and Sharon topped the list.

Nancy you’r right but usually when political correctness steps in it lead to a fight of words. I think women are just as sexy as men and I would love to see a poll. I don’t remember when they did it but I am surprised if someone didn’t think it was sexist.

Its just for fun, there enough bullshit in this world to bitch about! Women get objectified enough!

GH has the hunks 🙂

My top two “picks” too! Also, Steve Burton has a good look.

The dreamiest for me is definitely Justin Hartley, followed
closely by Scott Elrod.

I love how Kristoff St. John is the only actor’s name listed, as though the character Neil could never be considered “hot.”

Murphy should be on the list AND be #1. He never asked for a dime of Mrs. C’s money and he doesnt get caught up in any of the town’s drama! Perfect guy, huh ladies?

BTW, I bet CeeCee is picketing outside of the CBS studios ON Thanksgiving because Victor is NOT on this list! Sorry C.

Number 1 is Justin Hartley NO DOUBT!

I agree number one for sure.

What a life he must have!

Glad Oliver made the list, even though we’ll probably never see him again; where is Thomas though??

Whoever wrote about their storylines and romantic lives is watching about 6 months behind at least!