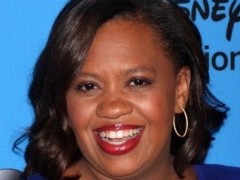 Grey’s Anatomy and long time General Hospital fan, Chandra Wilson checks into the ABC soap opera tomorrow for a special guest appearance! And while much of her Port Charles debut is kept under her wraps, the ever-popular Wilson shared some Intel with TV Guide Magazine’s Michael Logan, on just who she mixes and mingles with as the character of Tina Estrada! Here are a few excerpts below!

Chandra on if there is any truth to the rumors on the similarities between her Grey’s character Bailey and her GH character, Tina:  “Oh, we definitely have some fun and pay a little tribute to Bailey. But Tina has her own set of troubles. She goes to see her shrink, Dr. Kevin Collins (Jon Lindstrom), for their usual appointment at the hospital, but he’s not there. Instead, she finds Franco (Roger Howarth) in Dr. Collins’ office and he’s clearly up to no good. [Laughs] And he desperately wants Tina to go away!”

Chandra on confirming if she was indeed a true One Life to Live fan as well: “Yes! So it was really a hoot for me to work with Roger, though I still think of him as Todd and I always will! He’s making his longtime Llanview followers work real hard to accept him as Franco but, hey, it’s a soap! (Laughs) We daytime fans buy even stranger things — like evil twins and people coming back from the dead! ”

So, are you looking forward to seeing Chandra on the Wednesday January 29th episode of GH? What do you think about her comments on Roger Howarth? Comment below!

GH Knocked Out Of Soap Opera Showdown! AMC, OLTL, GL and DAYS Remain! Vote For The Best Soap Of All-Time!

I see RH as Todd wherever he goes, even on ATWT’s but I like him better as Franco than as Paul…

Roger Howarth is a powerful actor..
No matter who he plays he does it with perfection..
I like RH as Franco..
Franco changes in every episode, I like watching RH develop his Franco ..
When RH/Franco is on my screen I am totally involved with him it’s hard not get the wow factor when watching Franco .. 🙂

I watched and loved OLTL for decades.. I do not see RH as Todd, that is dead and buried, he and the writers have moved on and RH has another character to play and he does it very well as Franco.. love Franco 🙂 Guess some people can not move on and probably have the same hair style they had in the 70’s along with a one grove mind LOL.. Soap stars jump from soap to soap portraying different characters since day one and regular.. It s not RH who is knocking Franco out of the park it is fans… Read more »