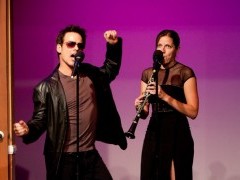 In addition, DAYS Nadia Bjorlin and her beau, B&B’s Brandon Beemer, were also in the audience, and the duo took part in a special birthday presentation at the end of the performance, when the couple brought out a birthday cake and the audience participated in singing Happy Birthday to Christian.

On-Air On-Soaps was also there, and reports back that our two favorite segments in the show were…Piano Bar, in which LeBlanc and ACME comedienne, Jen Parker, played a piano bar singing  duo who think they are the hippest thing in town, but clearly, they are not!  The second, was the video short Lickity Split where LeBlanc plays a sort of Hannibal Lechter-ish chef!

If you missed the streaming live show, you can now watch the entire performance with a video of Leblanc and company after the jump!

GH's Leslie Charleson addresses her fans on being taken off contract!