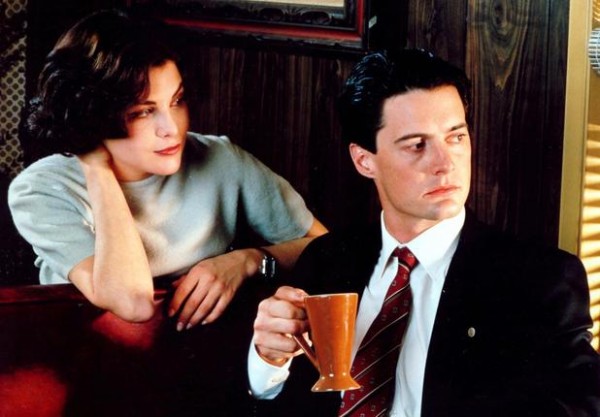 This weekend we posted the speculation from some intriguing tweets from the series creators, that an announcement could be forthcoming of a revival of the 1990-1991 soapy, eerie and twisted series, Twin Peaks!

The drama from creators David Lynch and Mark Frost that originally aired on ABC is getting new life 25 years after the original, but this time as a limited run series on Showtime! According to Deadline.com, “The nine-episode series will go into production in 2015 for a premiere in 2016 to mark the 25th anniversary of when the series finished its run on ABC.  In a fact that will delight Twin Peaks devotees, Lynch and Frost will write and produce all nine episodes, with Lynch set to direct every episode.”

The new Twin Peaks will be set in the present day, more than two decades after the events in the first two seasons.  It will continue the lore and story of the original series, with Lynch and Frost committed to providing long-awaited answers and, hopefully, a satisfying conclusion to the series.

As far as if the original cast members would be back?  Deadline revealed; “It is unclear which actors from the original series will be featured in the followup. Rumor is that Kyle MacLachlan would be back, likely reprising his role as FBI Agent Dale Cooper who was at the center of the show.”

Leading to the 2016 debut of the Twin Peaks limited series, Showtime will re-air the first two seasons of the series, owned by parent CBS Corp.  Watch the special announcement video after the jump! Are you excited about the Twin Peaks revival? Comment below!

GH's Michelle Stafford Video Interview: Everything You Wanted To Know About Nina Clay & Then Some Part 1!

WATCH: GH's Maurice Benard Talks Life In Front Of The Camera & Behind It On OPRAH's: WHERE ARE THEY NOW?

I didn’t watch TP and don’t have Showtime so I guess it doesn’t matter for me. Good luck to them though.

jimh…Please don’t drop your internet service unless you can find a better provider! How would we get our jimh(leave it to beaver) fix? All your friends/fans would miss you! I love your writing!!!

Im good until early next year but after that i dont know…i can still go to library if it comes to that and use their computers but not as often as im doing now!!!

Oh, jimh, please listen to 4ever. Go to the library, if you must, but peek in once in a while. I will do just that once I go back to teaching….just say hi now and then….later.

Should be very interesting.

There should be a mixture of veterans (Piper Laurie, Sherilyn Fenn, Peggy Lipton, Billy Zane) and newcomers. Hopefully we’ll finally get to find out what happened after that last cliffhanger- did Audrey Horne survive the bank explosion?

I loved Sherilyn Fenn on Twin Peaks and the remake of…Of Mice and Men…watch that movie if you haven’t already!!!

I do not have Showtime, I do not like nor want Showtime LOL..
hope all who have showtime enjoy watching 🙂 !

I can’t wait for this!! Loved watching it with my BFF!!

i hope the soundtrack and julie cruise’s lp “floating into the night” see vinyl re-issues !!!

the music was incredible. and the swaying pine trees.

I hope this marks a trend and in twenty five years the creators of Lost will bring it back and finally explained to me what the heck was that island really about. They explained the parallel lives time line as being the characters who died stuck in limbo waiting to more on to who knows where, but they never explained the island, the time travel stuff, why the corporation was on the island, and the like. But wouldn’t it be ironic that when those characters walked into the light they just ended back on the island again–LOL As for Twin… Read more »