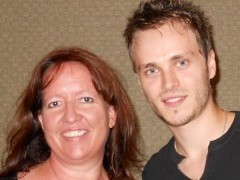 We have a winner!  Tracy Scott of Gilbert, Arizona, had all ten questions correct in our contest to win a guest spot on the November On-Air On-Soaps Podcast with Michael Fairman, GH’s Carolyn Hennesy, and a special male soap star co-host!

Here’s a bit about our winner Tracy!  Her favorite soap opera is General Hospital and favorite soap star is three-time Daytime Emmy winner, Jonathan Jackson (Lucky) of GH!  In fact, here is a picture of our winner with Mr. Jackson from this past July’s GHFCW.   After the jump, take a look at the  winning answers to the questions we posed to you, our fellow soapers, that could only be located by listening to October’s On-Air On-Soaps Podcast Episode # 7

1. What 1972 pop hit did Eric Martsolf and Staci Greason bond over during her return as Isabella that aired on DAYS last week?   ANSWER: Summer Breeze

2. What do Rick Springfield and Eric Martsolf share in common other than they both sing, have appeared on soaps, and are sharing a cruise ship appearance together? ANSWER: A love of Mojitos

3. What is OLTL’s Hannah going to do that is down and dirty for Halloween, that Kristen Alderson said, “The audience is going to really dig it?” ANSWER: Sounds like she is going to bury Starr alive.

4. Why did Rick Springfield decide to come on to General Hospital back in the 80’s to portray Dr. Noah Drake?  ANSWER: For the Money

5. What style and designer of bathing suits does Y&R’s Daniel Goddard like to wear?   ANSWER: Ed Hardy Speedo

6. According to Eric Martsolf on their 2010 production schedule, how many episodes per week are now shot at Days of our Lives?   ANSWER: 7 1/2 episodes

7. Where was Katherine Chancellor sitting when Y&R’s Jeanne Cooper delivered her monologue in the Power Performance of the Week clip?  ANSWER: The hospital Chapel

8. Who said there is nothing better than Steve Burton without his shirt and it is proof of God’s love for us? ANSWER: Carolyn Hennesy

9. What does “DARIC” stand for?  ANSWER: It’s the supercouple acronym for Daniel Goddard and Eric Martsolf

10. During the game show Stump the Soapers, one of the questions was, “On Days of our Lives, what stopped Carly from marrying Bo back in the 90’s?”  Who or what was it?  ANSWER: Lawrence crashed the wedding and announced Nicky was their son!

Make sure to come back to On-Air On-Soaps Podcast Episode # 8 later in November to hear Tracy’s guest spot! And thanks to all for entering.  We will do another contest for a guest spot in Spring of 2011, so be on the lookout for that.

DAYS Louise Sorel on Vivian's out of the sarcophagus experience!

AMC Bianca & Reese Flowchart! Do you want them reunited on AMC?

Congrats to my friend Tracy!!! This is so exciting!

Can’t wait to hear the Podcast. And what a great picture of you and Jonathan!!!

I had intended to enter this contest. When I saw the notice, I didn’t
have time to sit and listen and figure out the answers. When I came
back to enter, I was too late. I hope to be able to be in time to enter
the one in Spring of 2011.