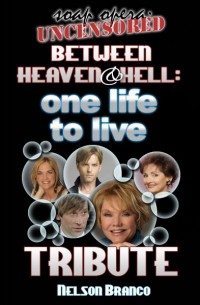 One Life to Life fans,  On-Air On-Soaps is giving you an opportunity to show us your knowledge of your beloved soap in our new trivia contest launching tonight!  If you answer all ten of our questions correctly and you are one of the first three to post them in the Comment Section attached to this news post, you will receive a copy of Soap Opera Unsensored‘s, Nelson Branco’s new book, Between Heaven and Hell: OLTL Tribute Book.

Now below put on your thinking caps and try to answer our OLTL trivia!  Make sure to number your answers in the Comment section 1 through 10 to correspond to the questions.   We will notify the winners by email, and you will have 48 hours to respond with your mailing address.  If we do not hear back from you, the prize will default to the next person with all the correct answers who posted them the earliest!  Good-Luck!

1. Name all of Viki’s husbands in order.

3. Who was Asa Buchanan’s first wife?

4. Which character was Bo Buchanan designed to be a love interest for with when the Buchanan stud was first introduced?

5. True or False: Agnes Nixon wrote a real-life Banner article on sexual diseases for One Life viewers to read which was incorporated into the show with Cathy Craig as its author.

6. Which year did One Life to Live expand to one hour?

7. Which real-life city suburb was Llanview modeled after?

9. While she was married to Hank Gannon who did Nora Hanen have an affair with?

10.  Name the first younger man Dorian had an affair with in a May-December romance?

Bo brought on as love interest for Victoria Lord

Banner Article – true (and 10,000 viewers wrote in requesting a copy)

LLanview based on Chestnut Hill suburb of Philadelphia

Nora had an affair with Hank’s brother, RJ