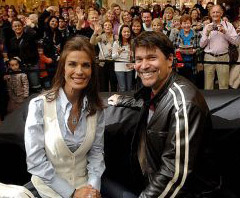 In Australia over the weekend, Days of Our Lives‘ Peter Reckell (Bo Brady) and Kristian Alfonso (Hope Brady) attended the TV WEEK Logie Awards in Melbourne on Sunday night (Australian time).  In addition, on Saturday the duo made an apperance at Sydney’s Castle Towers Shopping Center much to the delight to fans ‘down under’.  The Brady’s are also scheuled to appear on the hit morning talk show Mornings with Kerri-Anne on Tuesday.

"DAYS" stars to participate in Leukemia and Lymphoma benefit!