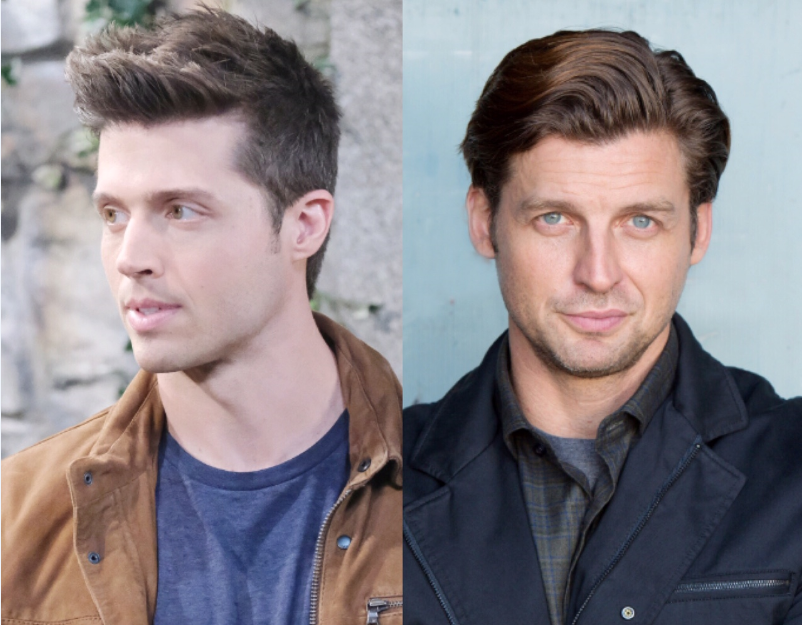 This week saw the arrival on the soap scene of two characters who look to figure heavily into story in the towns of Salem and Genoa City.  First, over at Days of our Lives during their first week of episodes with their time-jump, Brock Kelly appeared in his first scenes as Evan, the manny, to little David.

On DAYS, Evan looks to being taking an interest in a grieving and distraught Sonny (Freddie Smith), who is dealing with the anniversary of his mother’s death and that his husband, Will (Chandler Massey) is in prison for the crime that killed her (whatever that is has yet to be revealed).

For Brock Kelly this is not his first time on DAYS, having last been on the show back in 2005 as Abigail’s (then played by Ashley Benson) first boyfriend, Josh.

Over at Y&R, the much talked about Chance Chancellor finally arrived in Genoa City, and already had a confrontation with Cane (Daniel Goddard), helped save the day in a hostage crisis, and more.

Actor Donny Boaz has already mixed things up with many a resident of the town and shared scenes with Michelle Stafford (Phyllis), Mark Grossman (Adam), and more.  This is Boaz’s first daytime soap.  The last time Chance was in Genoa City he was played by John Driscoll.

From the looks of it, Y&R has major plans for the character of Chance and it appears that the series will soon reveal some of the layers of his connection to Adam, and figuring out who is behind the new will that emerged out of nowhere of the late Katherine Chancellor that has caused turmoil for so many.

If you caught Brock or Danny’s debuts; what were your first impressions? Let us know via the comment section below.

Dont care for the time jump,,,its like an over done spoiler alert…this has been the problem with Days…its long forgotten how to be a soap…Y&R stays being a traditional soap-why it continues to remain the top serial!!!…

I had never heard of Chance Chancellor until he was mentioned in Devons will thing..
but-
As soon as I saw him/watched him I like the actor Boaz, he’s good ..
Can’t say the same about the story..

Chance chancellor is Nina and Phillip son it’s hard to believe they’ve waited this long to bring him back , I wouldn’t care if I was under cover if my grandma died i would go back ,guess I’m not dedicate to the job!

Chance’s grandmother didn’t die. Who are you talking about?

Evan is interesting. I think he only had one scene though so hard to make much of an opinion. He seems like a nice guy. Likes kids, has a job.

Marlene, you are full of questions, aren’t you? First of all Cane’s wife Lily divorced him after she served time in prison for causing the death of Devon’s wife Hilery. Catherine was Devon’s grandmother and she left the bulk of her fortune to him, which he had been doing great things with,with the help of his late adoptive father, Neil Winters, before his death. As far as Brooke Forrester,she was trying to help her daughter, when her step-son turned out to be a monster, which created all the trouble between she and Ridge, because he has blinders on where it… Read more »

How did Devon come to inherit Katherine Chancellor’s fortune?

He was left it in her will.

On the B & B show, why Doesn’t Brooke pay more attention to Ridge her husband, instead of worrying about Hope all the time?

Because her husband Ridge is being an ass who is defending his psycho son who kept the secret that Hope’s daughter, Brooke’s granddaughter…was alive! Brooke understands that Ridge loves his son but beyond that? He’s badmouthing Hope, saying she’s trying to “steal” his grandson, etc.

If I was Brooke I’d be defending my daughter, who is Thomas’s victim (Thomas sure isn’t Hope’s) too. At this point, I’d dump him.

Do you watch the shows?

I really like the new guy in town as played by Donny Boaz. He looks so much like Jason on Gh, I can’t get over it. I also like him because he doesn’t seem to like Phyllis. She is totally pathetic. I almost feel sorry for her the way she inserts herself into everyone’s business or lives in general, and they shun her like the plague.. My worry is what he has to do with Adam. Chance has always been a good guy and I don’t want to mistrust him yet, due to reason by association. The other fellow, B.K… Read more »

PLEASE don’t place Chance with Abby! I don’t see the chemistry between them and lately,she has jumped from relationship to relationship. Maybe they should have her figure out what she truly wants?