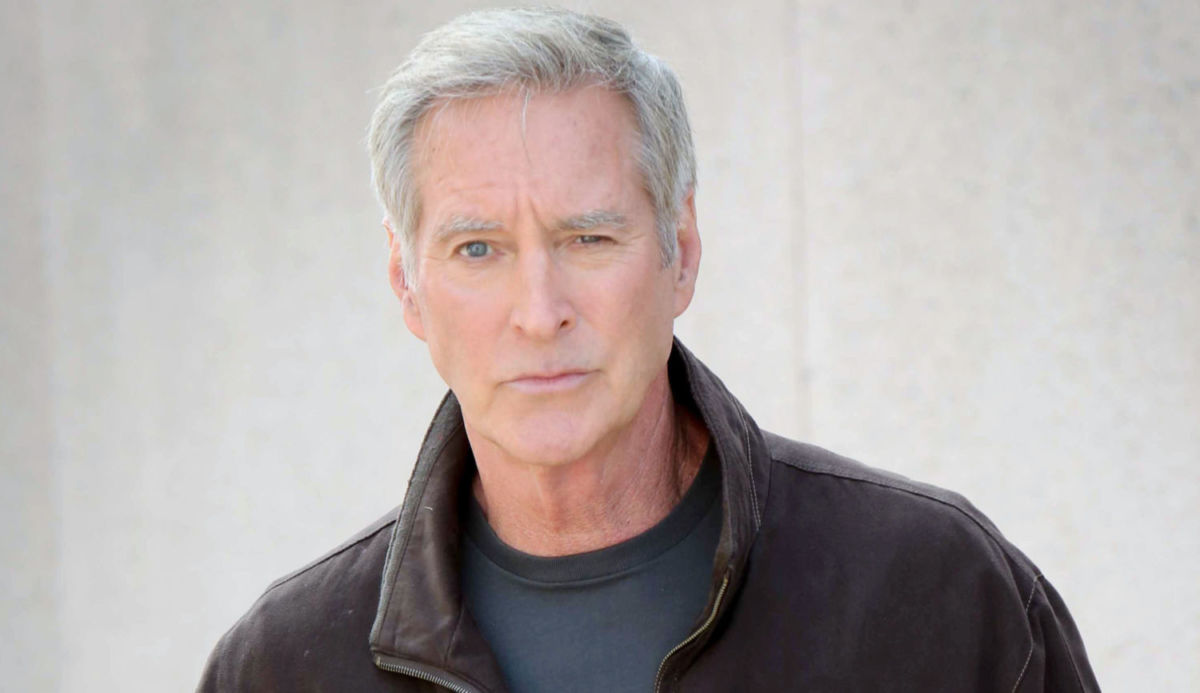 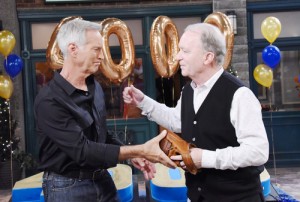 This week, Days of our Lives fan favorite, Drake Hogestyn (John Black) was honored during a set-side gathering marking his 4,000th episode on the long-running NBC daytime drama series.

Hogestyn, who has played John Black, Roman Brady for a time, the Pawn, and assorted other identities as daytime’s Jason Bourne, is really one of the best gents we know.

DAYS executive producer, Ken Cordsy made a speech about Drake’s time on the show, along with presenting Hogestyn with a baseball mitt that was given to Corday years ago, and that he was giving it back to Drake. 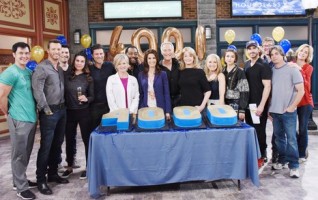 Drake tweeted  “We turned that Hourglass 4,000 times…that’s a lot of sand friends and I raise a glass of champagne to you!”  He followed it with “WOW!…so lucky and thankful to be on a team with the greatest cast, crew, production and fans!”

Share your congratulations to Drake via the comment section below on his latest milestone, and then let us know what has been your favorite John Black moment over 4000 episodes?

Isabella – I LOVED THEM. one of the closest to my heart story

Congratulations Drake. John Black is such a beloved character on Days and that is due to your character portrayal and the love you have for your fans. Looking forward to see where John Black goes next.

The memory I still have fresh in my mind is when Marlena had just gotten back to Salem after being held in captivity for 5 years. They were both down at the docks and when he saw her, he was so overwhelmed. Of course that was the beginning of him finding out he wasn’t Roman like we all thought he was.

Oh, I remember watching in the ’90’s during high school summer break-with John, Marlena, and Kristen! I used to love the show! Congratulations to Drake!

Did they do this for other actors on the show?

Congrats Drake on a very much deserved long run with the soap . Cheers to another long run with the show . Of all the stories without a doubt in my mind it has to be the john and diana ( genie francis ) love story from 1987 to 1989 . It was special , superbly acted and very well written . back then john thought he was roman . we want Genie Francis back on Days for good as Diana ! I have 40 friends of mine including my neighbour Bessie who will watch the soap again if that… Read more »

As much as I like Genie, I don’t really think the character of Diana Colville would have much of a place in the current population of Salem. She was brought in the first time only because Deidre Hall took a break for several years and with her presumed dead they had to pair up John (or “Roman” as he was then supposed to be) with somebody. They were a good pairing for the time, but there’s not a snowball’s chance in my front yard that John would ever choose her over Marlena The only possible storyline I could think of… Read more »

Gotta mention the Miami Vice ripoff summer storyline, back in the Days when John thought he was Roman (and ironically Chris Kositchek was in that storyline too… which would confuse any newer Days viewers if they watched the clips)

I liked Chris when he was involved with Mary Anderson…i still think of those days when he is on but i have accepted him as Roman-well sometimes!!!!

on as Chris and involed with the Anderson family!!!

They acknowledged him because he like Hall and Alfonso did 4000 episodes! He is one of the sweetest men I have ever known he has aged greatly and he never has a bad word to say about anybody ! Love the grey hair