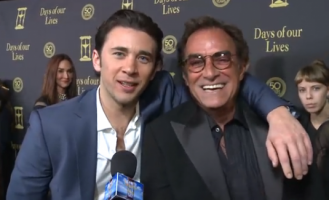 Last weekend in Hollywood (Sat. November 7th), Days of our Lives threw one fabulous shindig to celebrate and ring in their 50th anniversary at the legendary Hollywood Palladium.

Throughout this entire week, DAYS has been celebrating on-air with major dramatic episodes, and with their fans at the annual Day of DAYS event this weekend.  To mark the occasion of their once-in-a-lifetime celebration, where some of Salem’s finest and most notable past and present came together for one special night, the iconic series has posted a sizzle reel and inside look containing some of the hightlights from the night including soundbytes with: Deidre Hall, Drake Hogestyn, Kristian Alfonso, Chandler Massey, Joe Mascolo, Thaao Penghlis, Billy Flynn, Galen Gering, Arianne Zucker, Suzanne Rogers, Melissa Reeves, Eric Martsolf, James Reynolds, Ken Corday, Maree Cheatham, Melissa Reeves, Eileen Davidson, Alison Sweeney, Christie Clark, Kate Mansi, Patrick Muldoon and more.  Plus, a look at a few of the moments and performances inside the party featuring: Stephen Nichols, Bill and Susan Seaforth Hayes, Eric Martsolf, a celebratory toast led by Ken Corday, and much more.

While fans were in the bleachers watching the red carpet arrivals on DAYS biggest night, one of them enscapsulated the sentiments shared by many longtime viewers of what the series means to them.  And then to pay tribute to the longest running scripted series in NBC Television history, which has lasted an astounding 50 years, several cast members each gave a very special anniversary shout-out to their show.

Watch Days of our Lives 50th anniversary party video celebration after the jump!  Then share with us your favorite moment from it!

DAYS Is On FIYAH! Watch The Scorching Hot NBC Promo Of What's To Come!

This is great, thanks for sharing this. I saw the pics before but it’s nice to feel like you are there. It’s great seeing the current and former stars there.

Days is good right now and suspenseful but its a little too violent…..show needs some lighter moments and comic relief to help balance the show with so much gloom and doom in just about every episode! Too much depressing news in the real world as it is-i need my daily escape and im not finding it here! Still like the show and its the best right now!

Thanks for giving us an inside scoop on the celebration. The show is on fire right now and I hope it’s on for many more years to come! Long live Days!!

Thank you so much for sharing this Mr. Michael! Was at Citiwalk Saturday, but this was so much better!

Thank you for posting this. So glad Days reached 50 and to see all the actors saluting the show. They all seem to be in such great spirits. For the past few years (after my beloved GL and ATWT got cancelled), Days has been the soap for me.

A lovely, joyful celebration. Well-deserved. Thank you for sharing.

AWESOME! this is what a daytime drama should be. Admittedly a little dark and violent, but so suspenseful and, from my study (am relatively new to DAYS since the cancellations of my favorites few years back), true to families and history. The genre is not dead. Never was.

What a great party for the cast and crew to celebrate the 50th milestone. Thanks for including comments from Suzanne Rogers – my all time favorite.