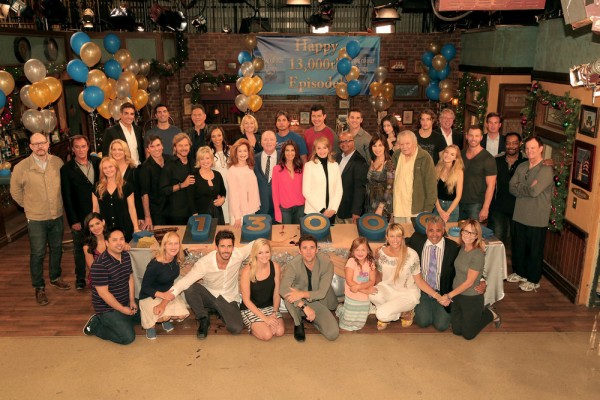 On Tuesday, the cast of Days of our Lives gathered in the early afternoon on the set of their soundstages to celebrate the show’s latest achievement and milestone … the taping of their 13,000 episode!

Executive Producer Ken Corday shared: “This is truly a staggering achievement. We have 13,000 blessings to be thankful for today. My deep and abiding appreciation to NBC and Sony Pictures Television for their unwavering support throughout the decades. I am so grateful to the generations of artists, craftspeople and faithful viewers who have devoted much of their lifetimes to Days of our Lives, falling in love with the people of Salem each and every episode. You have all made this breathtaking milestone possible.”

In an official press release, Jennifer Salke, President, NBC Entertainment shared: “In an age of where too many shows come and go so quickly, the legacy and longevity of  Days of our Lives is absolutely remarkable. We tip our cap to Ken Corday and his entire team, who have made the series an indelible part of television history.”

DAYS which is in its 51stseason will mark this occasion with a special fan event August 27th at the Wildhorse Saloon in Nashville, Tennessee.  There will be a Q&A and signing with talent from the show.

Share your congratulations for the cast and crew for 13,000 episodes in the town of Salem and still counting in the comment section below!

Peter Reckell To Return To The Cast Of The Fantasticks After 35 Years!

13-lol-unlucky number…glad the show is still on the air and hoping for changes soon to see it go longer but enough with kidnappings and death and destruction for awhile please!!!

I hope Leann Hunley, is coming back to Days. I love her so much. She is sassy, classy and a wonderful actress.

She is, Ricardo! Anna will discover that Andre is really Tony whom is really the father of Paul. Jasmine, the island girl, gave birth to Paul and put him up for adoption.

Where is Freddie Smith??

He was taping scenes with Chandler Massey at that time would be my guess, Dini.

Congratulations on 13000 episodes. May #Days celebrate 13000 more. Fine and outstanding actors, doing what they do best, entertain. Don’t let the haters and negative so called fans shut down Days. There are enough of us out there that watch and are not as vocal. Keep the romance, intrigue and excitement going. Keep family members together and on a selfish note get Hope and Rafe together they have a special connection. Again congrats

Days with all my heart… will forever remain… #1

I hate these 1 year renewals

for all the dark dismal and dank months… OK shoot

Ken Corday and Jennifer Salke need to wake up and realize what a disgrace this proud show has become, but sadly the permanent damage has probably been done already. How is it that we, the (former) viewers know it, but these so-called PTB do not (at least publicly)? We’re not stupid. This has to be the absolute worst, most offensive writing ever featured on a daytime soap, and that’s saying a lot. NBC should be embarrassed. Gee, if you’ve been under a rock for the last six months, you’d think it’s all sunshine and rainbows with this show from reading… Read more »

I agree what they have done to what was a once good show is disgusting. The new writers, ep’s and Ken have trashed and destroyed the show beyond recognition. That’s why so many who once loved the show have been leaving the show because they choose to destroy the show and as many characters as they could. Ken’s parents must be turning over in their graves at the massive damage Ken let happen and the many viewers they have chased away from the show.

I started to watch this show on day 1 and I no longer watch it. I just can’t watch the train wreck that has been made of this show. I took it off my DVR several month ago and I don’t think I will be going back. Ken Corday has lied and lied to us fans over and over again. So I am done with it. Makes me sad, it used to be a great show.

Who’s the young girl next to Billy Flynn?

I can’t find Billy Flynn….I see Casey Moss at the back by a young dark haired woman but……..

Lolol n/m I found him.

I Love Days! Always have always will. However I would like to see more couples stay together as a family unit, which is why the program worked for so many years. Thank you Doug & Julie, Marlena & John, even Maggie & Victor. How about getting Hope & Rafe together for good, and Jennifer is too young to be alone. Soaps need villains but also good guys like Jennifer (not going thru addiction). Congrats and thank you, look forward to many more episodes.

The way it’s going, present and former cast members will be gathering to mourn the massacre of what was once a great show. It sickens me to be watching the painful demise of a show I have watched from Nov. 1965.

I have watched Days since the beginning when I was a freshman at college and we would schedule our classes around the show. Thank goodness when v.c.r.s came out during my 35 yr.tecching career. Now that I am retired, I am still a faithful watcher and will be as long as you continue showing your wonderful stories about the families in Salem. Congratulations on 13,000!

It looks like Arianne’s daughter is next to her.

I’ve been watching since the very first episode and I can’t believe what it has become. I truly believe the writers are trying to turn this into a telenovela. Enough with the Hernandez family. Raphael and Gabi are good characters but the rest of them can take a hike. BRING BACK THE BRADYS, HORTONS, KYRIAKES’ AND DIMERAS! I never thought I would see the day I would have to read subtitles on this soap, but it happened! Enough is enough- let’s get back to “the Days of Our Lives” and leave the telenovelas to Univision and Telemundo. PPLLEEAASSEE!