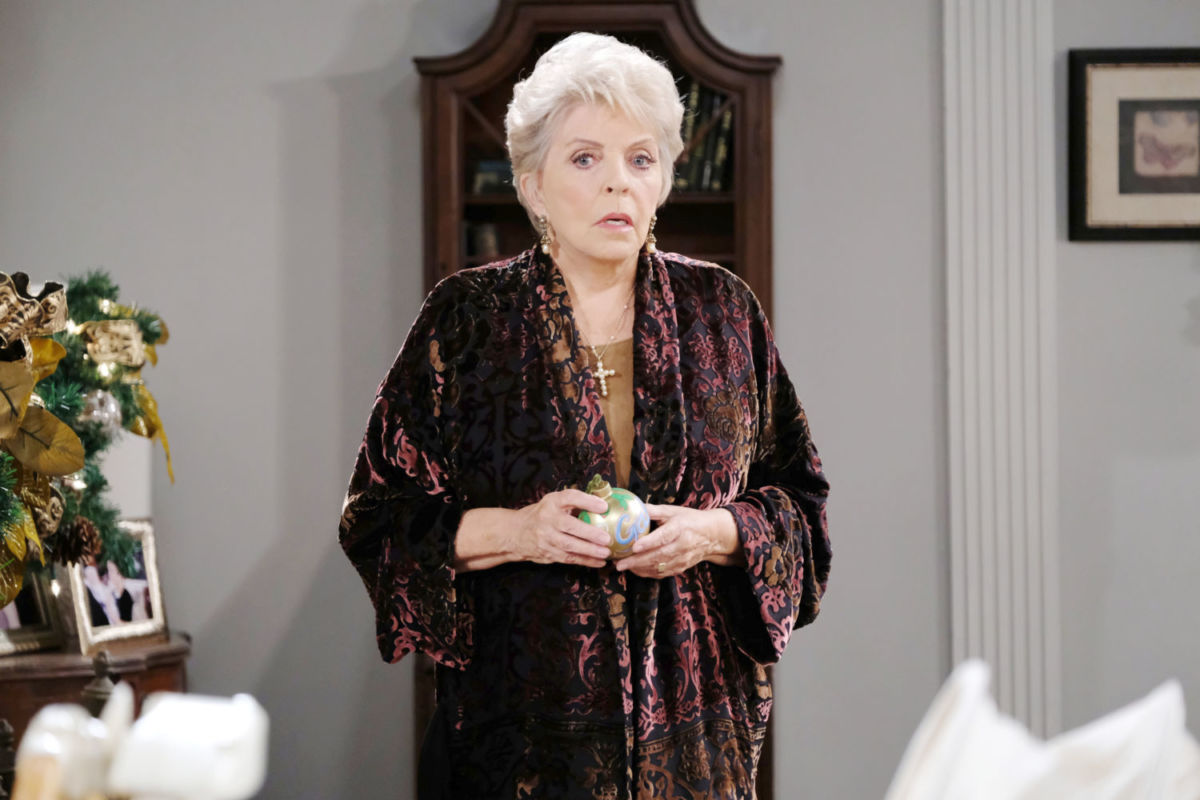 Ah, we were waiting for Julie (Susan Seaforth Hayes) to come through and she did and in record soap time – glad her amnesiac bout was short-lived.  On the Christmas day episode of NBC’s Days of our Lives, Julie and Abigail (Kate Mansi) have a chat at the Horton’s about Gabi (Camila Banus).  Feeling guilty she had Julie snoop around on Gabi, (which eventually led to her tumble down the stairs), Julie says they need to keep their eye on the bigger prize is doing a “victory dance” when they bring down Ms. Hernandez for making Abby look like she has been suffering from her mental illness (DID), yet again.

Stefan (Tyler Christopher) shows up at the Horton’s demanding to see his daughter, Charlotte.  Abigail is not happy about him just showing up unannounced, especially after she delivered a special Christmas present to him … divorce papers … and then revealed she had been playing him this whole time as Gabby with a “Y”, and had exited the DiMera mansion with baby in tow.  Abby brings Charlotte to Stefan, who lowers the boom on her saying he is taking the baby back home with him.  He pulls out custody papers that his lawyer had drawn up.  Hearing Abigail and Stefan argue, and Stefan professing, “That is my daughter”, etc, leads Julie to have a startling revelation!

Suddenly, Julie’s memory is sparked about her confrontation with Gabi and how she fell down the stairs, and finding the DNA results that Gabi was hiding that proved that Chad (Billy Flynn) was Charlotte’s father, not Stefan.  Julie drops the ornament she was holding in her hand and it breaks, when she remembers! She then tells a stunned Abby and Stefan that Chad is Charlotte’s biological father.  She continues to tell them how Gabi switched the paternity results and when she confronted Gabi about it, they had a struggle as Gabi was trying to rip the results out of Julie’s hands, thus causing her fall.

Stefan demands real proof, and so he and Abby  head to the hospital to find Kayla (Mary Beth Evans).  When they go into Kayla’s office,she tells them that she remembers now that Gabi was with her the day that she got the DNA results.  Thus, Gabi is looking more and more guilty by the second!  Kayla goes into the hospital database and sure enough, Chad is the father, not Stefan.  Mr. DiMera is in complete denial. 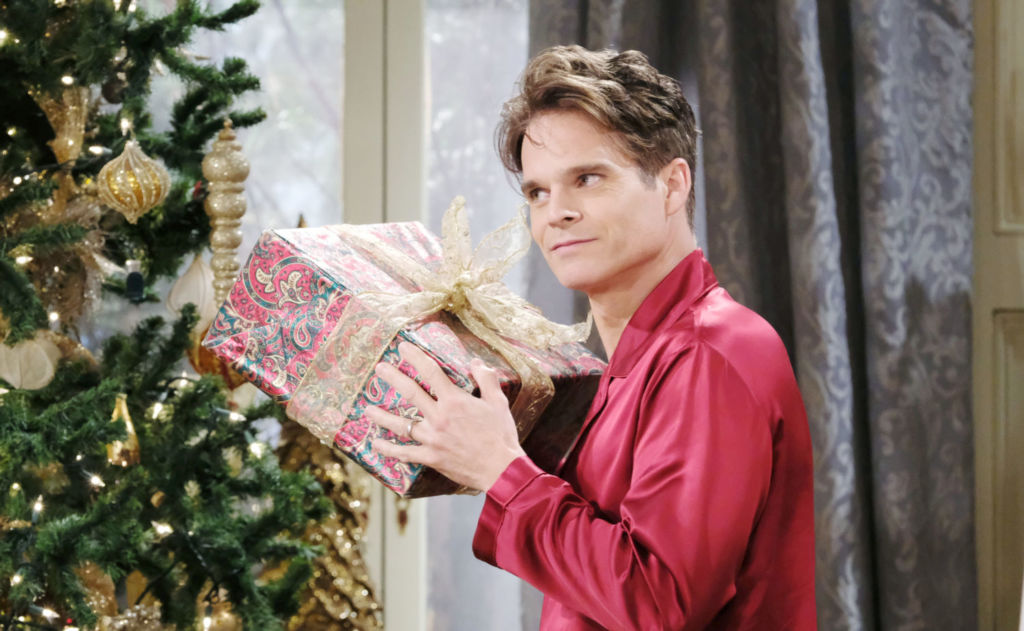 After the hospital Christmas party for the kids – and how funny was Leo (Greg Rikaart ) in his decked out Xmas outfit, and those lines of dialog remarked to the sick children – Chad and Gabi come home.  When Gabi goes upstairs to pack for their move, Abigail arrives with Charlotte.  She tells Chad that Charlotte is his bio-daughter.  Chad is speechless!  Meanwhile, Stefan is alone at Christmas in the mansion, and picks up the present he got for Charlotte, and then smashes it to the ground and begins to sob.

So, were you glad Julie’s memory came back pretty pronto?  Are you rooting for Chad and Abby to finally get back together? What should happen to Gabi now that her jig is almost up?  Share your thoughts via the comment section below.  And for more with Susan Seaforth Hayes’ big week of story and her 50 years of Julie make sure to check out the latest episode of Inside Salem: Days of our Lives Podcast streaming now at NBC. com and on all major pod platforms.

THE YOUNG AND THE RESTLESS: Nikki Is Willed To Live By Victoria, Nick and … Victor

Outstanding performance by all

I love Greg as Leo. He is so funny. We need levity on the show. Announcing himself as Leo Kiriakis. LOL And he’s outfits are fabulous! Greg seems like he’s having fun.

Love seeing Julie any day of the week.

Mono, as much as I enjoyed Greg on Y&R as Keven, I can’t stand his part on days. He’s totally obnoxious to say the least, and I love what Adrienne called him, a little rodent. I know a lot of people think its humorous, but I just can’t see it at all.

Sorry you’re not enjoying it.

Days is the only soap i watch regularly…

Agree, no wonder Days won Best Show of 2018 in Soap Opera Digest’s best and worst of the year edition. I believe it won in most, if not all of the soap media for best soap of 2018.

Hi blake : super exciting to read… I “knew” that it would be DAYS but; till you see it in plain sight of note : SOD also mentioned that last years issue, had voted @DAYS MOST IMPROVED. so from one end of the spectrum… heck in that same year.. @DAYS from last to most improved to the following year, TOP tier. YES adding because we can… and DAYS fans still should savor the wins at the last emmy : @DAYS WINNING The triple crown so to speak . 2018 : Best Show ; best directing ; best writing… AND am… Read more »

Yes, blake, and that’s on top of DAYS winning the Daytime Emmy Award for best directing, writing and show!!!

Thanks for the reminder, I forgot Days was on Christmas day. Now I have two episodes to watch on the nbc website!

Leo is so funny.Those outfits he wears are something to be desired.We need some laughter on the show
I am so glad that Julie remembered what happened just before she fell.I hope that Gabby rots in hell.Finally Chad gets it through his head that all the problems Abby had were due to Gabby.

Agree Carol, Leo brings so much life/energy to the show and to the other actors and characters he’s involved in.

The Christmas episode was EVERYTHING! Loved how Julie got her memory back, broke Gabi’s tree ornament and told Stefan and Abby that Chad is Charlotte’s father. Like Julie said in today’s episode I felt bad for Stefan, the love for the baby was his only redeemable feature. I loved Leo’s outfit and the lines that he delivered. Also glad that Sonny and Will got some private time together and were able to kiss. So glad that the Gabi/Chad/Abby/Stefan story is wrapping up and so quickly. Figures it would happen since Abby’s father, Jack will show up alive on New Year’s… Read more »

Chad threatening to call the police on Gabi made me wonder, exactly what crime did she commit?

Lying — the whole town would be in jail. Fraud — nobody suffered financial damage. Forgery — the official results were still in Kayla’s computer, taking two seconds to find once searched. Assault — it didn’t look like Gabi pushed Julie down the stairs, but rather Julie lost her grip on the pocketbook she was pulling on.

As far as I know “gaslighting” is not a crime, and neither is hurting other people’s feelings.

Chandler Fan
How about drugging a pregnant woman, then dragging her around from place to place, stealing privileged info from a Dr’s desk, and changing results of that test, blackmailing Kate. Maybe one of these things might stick.
She better not get off Scott free, but there again Gabi always seems to fall into a pile of —-, while coming out smelling like a rose. Just what she accuses Abby of

changing the hospital praternity tests is a crime, she also admitted that she drugged Abby with her prescribed medicine. I agree that other people, including Kate and Stefan should go down as well. Since the actress Camila’s contract is up in April I wonder if they will use this as a way to write her off the show. She has that primetime show now and may likely leave. I haven’t seen her in the show’s anniversary party photos nor the show’s holiday party photos.