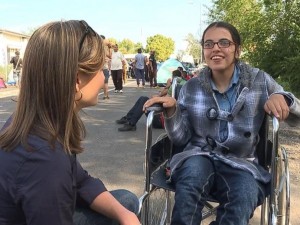 In a compelling piece from ABC News,  a 16-year-old Syrian teenager named Nageen Mustafa has faced so many obstacles in her young life.

For 20 days, she had traveled from her home in the war-torn Syrian town of Kobani to the Serbian border with Hungary.  Nageen is bound to a wheel chair, but her English is pretty impeccable.  Learning English for her did not come from being on the inside of a classroom or mingling with other children, in a culture where she  was shunned for her disability, according to the report.

When she was asked how she learned to speak English to the ABC news reporter she answered:  “At home with my favorite TV show Days of our Lives“.  She said beaming.  “I watched it for two years.  I was waking up at 8 a.m. some days to watch it. That’s a great show.  But they killed the main character that I loved!”

Nageen added she has learned much of the world from watching TV and she now has an impressive to do-list, as she dreams of her big future.

However as of last week, the young girl’s future was up in the air according to the ABC report.  She had just arrived at the Serbian-Hungarian border to find the route closed and her plans suddenly halted.  Just hours later, violence erupted on the border as refugees broke down the gate and tried to force their way into Hungary.   Her goal is to get to Germany.

What do you think about how this young teenager learned English from watching Days of our Lives?  Does it speak to the power of the genre on people from all over the globe?  Share your thoughts on this international story in the comment section below?

THE BAY In Search Of New Executive Producer!

Sweet girl. I have been horrified by the situation in Syria. It makes me feel like my own life is such a gift which I take for granted every single day.

I hope she reaches her destination and that they will give her refuge. Epitome of courage she is ❤️

I second that!!! Please Mr Corday do something.

I’m guessing her character that was killed off was Kristen, Sami or Ej.

You forgot to say : she watched it to see her favorite characters Ej and Sami ! And stopped when Ej died. She has good taste.

I would like to know who her favorite character was that they killed off.

Good luck to her.

I bet E.J. was her favorite character.

Indeed, she is really smarter than Ken Cordumb (who did everything to destroy these characters, Ej particularly..the old dumbass..)
Anyway she seems to be a great gracious, intelligent and very inspirational teen, who will continue her journey, she seems to be a real trooper, very worthy of admiration.

Last Week Tonight with John Oliver made some calls and got the actors who play EJ and Sami to film a special promo for her. It was pretty awesome.