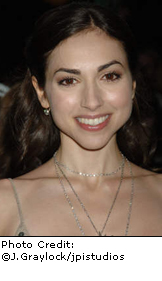 Eden Riegel, (Bianca, “AMC”) and new Webby Award winner, is preparing for the Disneyland Half Marathon by going into training for it at the National AIDS Marathon Training Program.  The goal is to raise funds for AIDS Project Los Angeles, a charity close to “On-Air On-Soaps”.  Last October we were proud to be part of their fundraising efforts for AIDS Walk LA, by throwing the Soaps In The City benefit in Los Angeles.  Now Eden is asking for our support.  Below in her own words is her goals and how you can join in the effort to stop this pandemic!

“I’ve decided to take on a tremendous challenge to help in the fight against AIDS, and I really hope you will support my efforts.  Over the next several months, I’ll be training to complete the Disneyland Half Marathon; PLUS, I’ve made it a personal mission to raise at least $5,000 for AIDS Project Los Angeles.

Nearly 1.2 million Americans are now living with HIV, and 56,000 more will be infected this year!  These aren’t just numbers; this is impacting real people and their families.  For 25 years, AIDS Project Los Angeles has been providing food, home health care, and other basic needs to thousands of people whose lives are affected by HIV/AIDS.

Many of these people are living in poverty and have few places to turn. Now that the economy is struggling, understandably, people are tightening up on their giving.  But consider this, if things have been rough on you or someone you know, just think about how much more difficult they are for those that have even less… those that have nothing!

So, that’s why I’m asking for your help.  Please join me in doing all that we can to bring an end to this epidemic.”