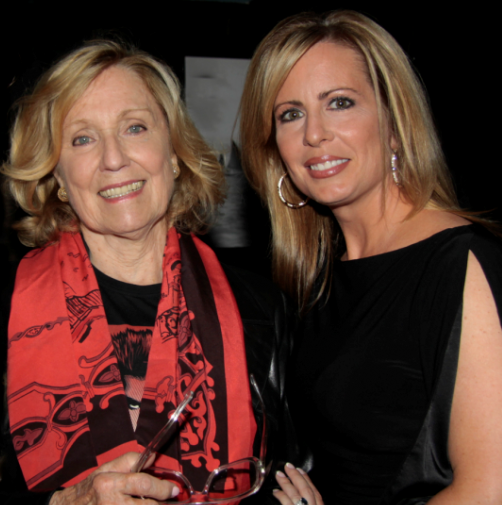 Daytime Emmy winner and soap icon, Elizabeth Hubbard is joining the world of the web series! News on Thursday’s has the former As the World Turns and The Doctors favorite joining the cast of the Anacostia!  Elizabeth will play a role specifically created for her – that of Eva Montgomery.

Anacostia will film its new season this fall in Washington D.C.  Series creator Anthony Anderson said about the casting addition of Hubbard:  “We are incredibly excited to have the amazing Elizabeth Hubbard join us for Anacostia this year.  It was so hard keeping such a huge secret from the loyal viewers of the series. Ms. Hubbard is a legend and is one of the true architects of Daytime Drama. This is a dream come true. The episodes are gripping and compelling and I am sure will be a treat for all of Ms. Hubbard’s fans to see her again doing what she loves.”

Martha Byrne, who won a Daytime Emmy last year for her role on Anacostia will be reunited this season with her former on-screen mother!  Bryne actually co-wrote the story arc for Hubbard with Anderson and will make her directorial debut in scenes featuring the two actresses.  Byrne commented:  “I’ve said it many times, Liz forever changed the course of my life with her willingness to treat me as a peer, even as a teenager. To be able to write for her and guide her as a director is something I never thought possible in my career. Thanks to Anthony and Liz, I have another opportunity to work with one of the most influential people in my life. I can’t wait for the fans to see what we have planned.”

But there was an even more intriguing news!  Long time soap fans know that Elizabeth Hubbard’s life has been colorful, dramatic, and unique.  Martha Bryne has also announced her plans to film a docustory on Liz.  She related on her new project:  “For years I’ve wanted to the world to see the Liz I’ve gotten to know throughout my life. Her experiences in daytime are ones that everyone in our industry and beyond need to know. Who Liz is outside the world of soaps is filled with bravery, humanity, fearlessness  and humor. Being a witness to her life, I’m a richer person for it and so are millions of others. I’m hoping our audience for this piece will learn more about Liz and walk away with a greater understanding of what drives her. She’s amazing.”

So, what do you think about Elizabeth joining Anacostia?  Sharing scenes with former on-screen daughter, Martha Byrne?  Would you like to see the docustory on acting dynamo, Elizabeth Hubbard?  Let us know in the comment section below.

REPORT: Kassie DePaiva OUT At Days of our Lives!

I have never watched this online series but definitely will look for it with Hubbard appearing.

Hubbard is fantastic. I would be entertained just watching Hubbard read from the phone book for an hour.

I’m not sure how recent the photo with this article is. (Hopefully, very recent!). Hubbard looks great in it.

Thanks for reporting this. I welcome any updates/information that you can pass along about veteran soap actors who seemingly have disappeared with the cancellation of their shows. (Yes, I’m thinking about Don Hastings, Eileen Fulton, Kim Hayes, Marie Masters!!).

This is wonderful. I’m looking forward to seeing Ms. Hubbard back on screen again. It’s been too long.

I have missed her since the demise of my favorite soap ever ATWT. I have never watched an online soap, but I will be checking out this one Elizabeth Hubbard is a soap legend and I can’t wait to see her kicking some soap butt!!

Is that a recent pic of them? They look great!!! They look better now they when they did on ATWT.

GOOD LUCK TO BOTH OF THEM…MISS ATWT!!!

One of the two best soap actors ever on soaps. The other being the late Beverlee McKinsey.

Loved As the World Turns!

Both of the projects sound amazing! Martha’s words about Elizabeth are very touching to read, and I am thrilled that she helped engineer Elizabeth’s return to our screens. The bio is especially intriguing because Elizabeth IS a legend! Great news all the way around in this article. Way to go, Martha and Elizabeth.

Am enjoying Retro-TV’s double a day reruns of The Doctors circa the late 60’s…Ms. Hubbard as Althea is a revelation. She is nearly a different person than when she later played Lucinda. Brilliant idea to have this equally brilliant icon who continually loves her work grace the new wave of soaps…yep, this is how to get more viewers! She does deserve her life story produced, too. Looking forward to Liz, Liz, Liz!