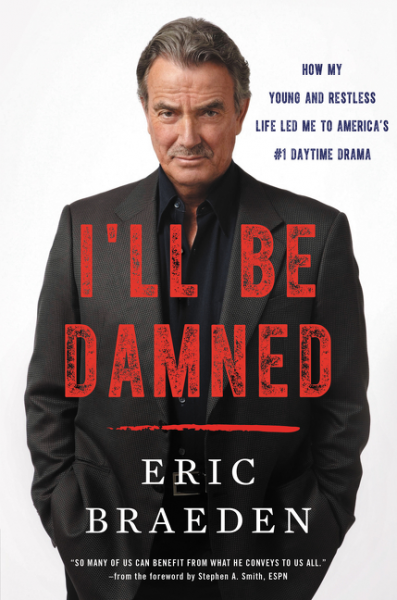 Want to be one of the first to have Y&R’s Daytime Emmy winning icon, Eric Braeden’s (Victor Newman) memoir? Now comes word via Braeden himself that his book is now available for pre-order in advance of its nationwide release on February 7. 2017.

The memoir entitled: I’ll Be Damned: How My Young and Restless Life Led Me to America’s #1 Daytime Drama, chronicles his amazing life, from his birth in World War II Germany to his arrival in America to his rise to humanitarian and daytime superstar for the past thirty-five years.

According to the official description of the book:  “Told with openness, candor, humor, heart, and occasional raw vulnerability, I’ll Be Damned reveals a man committed to making the world a better, more loving place. Filled with sixteen pages of photos from his decorated life and career, I’ll Be Damned will be a treasured keepsake for Y&R fans, and is an inspiring testament to the goodness within us all”

READ MORE
Y&R's Eileen Davidson, Knots' Donna Mills & GH's Laura Wright Talk On Life in the Soaps
Related Topics:eric braedenHarper CollinsI'll Be Damned: How My Young and Restless Life Led Me to America's #1 Daytime DramaMemoirThe Young and the Restlessvictor newman
Up Next

Connie Britton Confirms "She's In" For The Duration Of New Season Of Nashville! Official Two-Hour Premiere Tonight On CMT!

OLTL Alum Eddie Alderson Touches Base With Fans: "Just Wanna Say That Your Continued Prayers And Positive Messages To Me Are So Appreciated"

Love the title: “I’ll be damned”, I always chuckle when he says that on the show. That part of the title I can see EB coming up with. Now the second part of the title “…led me to America’s daytime drama…” that sounds like some CBS PR person wanted that in there. LOL! Sounds like a good read.

He attacks all his twitter people who disagree he attacks his co stars he throws chairs at directors ! Etc etc Yow he is a real peach ugh

OMG! He’s the only person to ever do this, right?

It’s fine that you don’t like him. But it’s always better to focus on the folks you like rather than the ones who irritate you.

I agree. And I, too, chucked at the title. So Eric.

I hope that he’ll be narrating the audiobook. As of now, on Audiobooks.com, the narrator is only listed as “To Be Announced.” Eric Braeden’s life story in his own words will be great, but in his own voice will be even better.

Love to see if he tells us his reasoning behind knocking someone’s teeth out??!

I love the title too!! I can hear him saying that, for sure! It’s awesome!

I usually don’t end up reading very much, but I have great respect for Eric Braeden on so many levels, and I am quite excited that he has taken time to write and share his story. I know it will be a fascinating read and I can’t wait!

I love Eric Braeden and can’t wait to read his memoir.

I don’t give a damn

so he bellows and acts out

LMAO I love that title!

I hope he does a book tour! He and Anthony Geary are two soap icons on the daytime Mount Rushmore!

Now when is Tony G. going to publish the book he has said he is working on????? Your guess is as good as mine. And who wants to read it? Mmmmmm. Maybe I do and Genie? LOL!

I hope the letter he left Laura addressed to “Angel” is published since we never knew if she opened it!