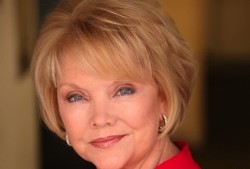 It is always great to hear from six-time Daytime Emmy winner, Erika Slezak ! And now in a new interview exclusively on her website via her long time fan club president Walter Miller, the most legendary star of One Life to Live shares her thoughts on went happened to the online revival of OLTL, the lawsuit involving Prospect Park, if she would like to work at General Hospital with former One Life EP Frank Valentini, and what it has been like for her trying to find work as an actress post-Viki! Here are a few excerpts below!

Erika on what the last year has been like for her and her thoughts on the end of One Life to Live’s online reboot:  “I have good days and bad days. I’m never unhappy, but I would very much like to go back to work. Last year when the Prospect Park thing happened, I was very happy, and then it all fell apart. I want to applaud Prospect Park. They really tried. I think they wanted it to succeed, but it was a new audience for them, and a different venue. In order to get the daytime audience to watch online, they needed to give them daytime, and they weren’t. They were trying to change it up and do something our audience was simply not used to. But it may have been too much music, too much loud music, too many new characters (new actors playing existing characters), whom they focused on immediately. Maybe less traditional, and it became a problem. But they really tried, and I commend them for that.”

Erika addressing published reports that she is mentioned in the Prospect Park lawsuit claiming the company owes her money:  “Yes, but they owe ABC a lot more than they owe me. They owe the company that provided all of the lights and cameras, as they had rented all of that from them. They owe the studio too. Well, they just owe a lot of money in a lot of places. That’s not to say that they won’t pay it, but they are going to have to come up with some money.”

Erika on if she would be up for playing a role on General Hospital (since for legal reasons it would seem she can’t  play Viki at this point) or play a role on another soap:  “It would depend entirely on the role, but I would happily work on any thing – and yes, I would love to work for Frank again. He’s an awesome man and a wonderful producer.”

Erika on auditioning again and how it has been going:  “I’ve auditioned for a bunch of things, and in each case they said the audition was wonderful, and the producers and directors loved me, but they had someone else in mind from the start. So, that happens. My agent said that we are going to have to find a producer who is a good friend of mine, who has ME in mind for a part from the START. Of course, I’m joking! But that’s what happens, you know. People have worked with other people over the years, and they see a role and say, ‘My friend would be great for this,’ but according to the union, they have to see people audition for it, and they do. But in the meantime, I’ve been able to meet a lot of interesting, talented casting directors, and directors, and producers, which has been very good for me. Hopefully, something will come out of that.”

So what do you think about Erika’s comments on Prospect Park and the end of OLTL?  Missing her on the soaps? Would you like to see Frank Valentini give Erika  a role on General Hospital?  Do you hope at some point the legal issues would be worked so that the character of OLTL’s Viki could show up in Port Charles? Share your comments below!

Burgess Jenkins Chats On Taking Over The Role Of Billy Abbott On Y&R!