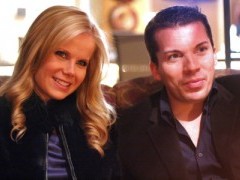 Ok, this is truly better than some storylines on even the best soap operas airing right now!  Because, it is has so many twists and turn,s we will encapsulate here, but make sure to read the post from The St. Petersburg Times.

This story broke over the Memorial Day Weekend – former Llanview bad girl, Stacy Morasco, played by Crystal Hunt, called off her engagement to very wealthy and successful cancer surgeon, Dr. Phillipe Speiss, after Hunt hired private investigators to dig into Speiss’s past with another woman, and his child by her.   In the claims, Hunt said that Speiss originally told her that the child was a product of  a one-night stand.  However, after digging and receiving an anonymous letter, Hunt claims she found out that he was having a relationship with this woman, not a one night stand.  So, Hunt called off the engagement, but wants to keep her engagement ring.

Crystal  feels she has the keep the ring  after buying the home and nearly $900,000 worth of gifts for Speiss during their relationship.  But Spiess’ Tampa lawyer, Ellen Ware, said Hunt is legally obligated to return the ring.  “In Florida, an engagement ring is a conditional gift. If you break off the engagement, you give the ring back,” she said.

"Sins Of The Father" GH Marathon set for Father's Day!