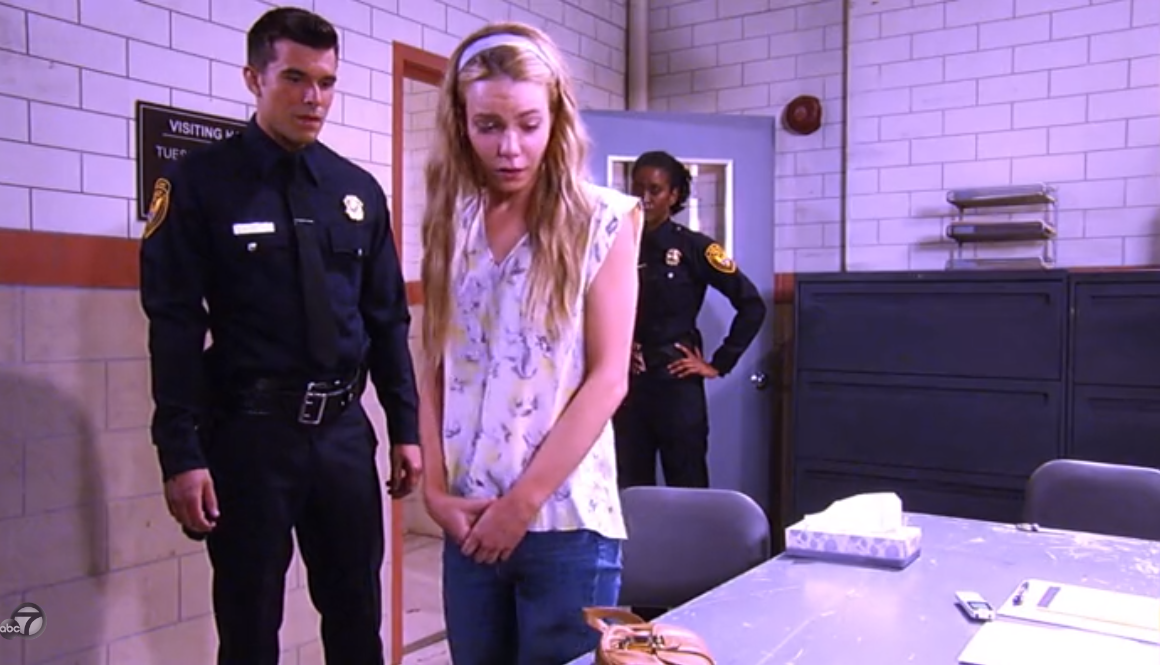 On Tuesday’s episode of General Hospital, viewers were given more of the back-story between Chase (Josh Swickard) and Nelle (Chloe Lanier) told through a series of flashback from their disparate recollections.

At the PCPD, over the phone, Chase thanks his former police partner, Abby for sending the files he had on one … Janelle Benson.  As he peruses through the files and sees the image of Nelle contained within it, and a postcard from Florida, Chase flashes back to his interrogation room and meeting suspect ‘Janelle’, when he was working as an officer in Maine.  Nelle was being questioned in the drowning of her fiance’ Zack..  Chase asks why the upset ‘Janelle’ chose to vacation in Maine instead of Florida.  She says it was so Zack could put space between him and his disapproving family.  However, ‘Janelle’ does admit going kayaking was her idea.

Next, she cries that she had to make the decision to try to save Zack from drowning, but thought maybe she might die too, so she decided to save herself, and not go in after him, in what was an impossible situation to be in.  Abby questions ‘Janelle’ about Zack changing his will right before they headed off for their vacation.  ‘Janelle’ lets it firmly be known that it was all Zack’s idea to change his will.

Chase believes ‘Janelle’ is innocent, but Abby thinks Janelle is played the helpless victim card.  Chase decides to release Nelle.  Later, Chase remembers traveling to Florida, because Nelle was reportedly being harassed by Zack’s family.  When he got to Florida, he recalls staying in a motel, and was set to meet up with her at a diner.  However, ‘Janell’e surprised him while he was half-naked in a towel and the door of his room.  Next thing you know, things get hot and heavy as she seduces him.  Chase flashes to them hitting the sheets and being in the throes of passion, and promising to take care of everything for her.

Meanwhile, Nelle and Michael (Chad Duell) are talking at The Floating Rib.  Nelle admits to Michael that she has a past with Chase, and her fear of him trying to bring her down now that he is in Pot Charles.  She says that Chase would do anything to get ahead in his career.  Michael asks if Maine was truly the last time she saw Chase.  She says it wasn’t, and says he followed her to Florida.

Now, as there are two sides to every story, Nelle flashes to coming to visit Chase at his motel room; where he is only wearing a towel . In her version, she portrays Chase as the instigator.  She start to cry and tells Michael that in her gut she knew that something was off about Chase, but she felt like she was drowning inside and he was her lifeline. Nelle says Chase became obsessed with her.

Then while alone, Nelle remembers how she was able to get Chase to go out to the store and get her some water after their hot sexcapade.. Once she is all by herself, Nelle calles the police to report misconduct by an officer at the motel.  Meanwhile, Michael has headed over to the PCPD to confront Chase.

So, which version of the story of  Chase and ‘Janelle’ do you believe? It appears Nelle has done a number on Chase. What did you think of Chloe Lanier’s performance where she can go from portraying the victim in a situation, to an evil bitch, with ease?  What do you think of Josh Swickard as the PCPD’s main cop, now that Dominic Zamprogna (Dante) is on his way out of GH?  Share your thoughts in the comment section below.

THE YOUNG AND THE RESTLESS: Jason Thompson Delivers ‘Power Performance Of The Week’ As Billy Falls Back Into Temptation

THE BACHELORETTE: Two Rose Ceremonies, A Lumberjack Fetish  & One Guy Tells Becca He Is Falling For Her Then Takes It Back