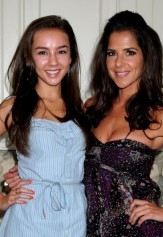 Ah those loveable mobsters, doctors, nurses, detectives, lawyers,  and a host of all sorts of town folk from the city of Port Charles descended upon the Sportsman’s Lodge in Studio City, California this past Saturday for the General Hospital Fan Club Weekend Main Event!

And On-Air On-Soaps is happy to report there was a tremendous show of support from the cast with almost everyone from GH in attendance including the shows executive producer, Jill Farren Phelps.   We were in the Green Room prior to the event and were present when the cast walked out to thunderous applause from their legions of adoring fans who traveled near and from very far to be part of the festivities.

The Q&A provided many fantastic and hilarious moments with the cast, and the always popular autograph lines were the place to be to get a picture and a “John Hancock” from your PC favorite.

On-Air On-Soaps will have many interviews and a very special Michael’s Blog on the event coming later this week, but for now enjoy our photo gallery of the arrivals of the stars of General Hospital after the jump!

*Remember, when viewing the photo gallery below, click the “NEXT GROUP” button to the right of the + sign  to see more images, or you can just view as a slideshow.

Sneak Peek: Josh Duhamel images of his return to All My Children!

1. i love john york’s pants 2. where is your vanessa marcil giovinazzo photo??!!!!

Steve Burton is the only one worth looking at.