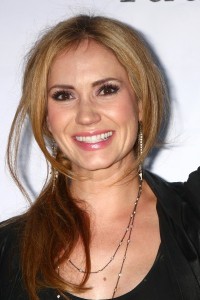 Exciting baby news on Friday via PEOPLE.com, Ashley Jones, currently appearing on General Hospital as Parker, and who has also been recurring for several years on The Bold and the Beautiful as Bridgit Forrester, is pregnant and expecting her first child … a baby boy!

Jones is expecting her new bundle of joy in May!  The actress is married to Joel Henricks. While this will be her first child, Ashley is currently mom to Henricks son 3 1/2-year-old son, Huck from a a previous relationship.

“The transition into becoming a family has been full of surprises and useful lessons. Huck was only 2 when I met him, so we journeyed through potty training and sleep training together.  But I’ve been told nothing really prepares you for a newborn at home,” Ashley told PEOPLE.

With two months still to go in her pregancy, Ashley is busying hiding her pregnancy on-camera on GH: “I started taping General early December 2015, not knowing how long the storyline would last. Executive producer Frank Valentini has been wonderfully accommodating and supportive. I look forward to each new script from the writers.”  Look for Parker to return to the canvas on the March 22nd episode of the ABC sudser.   Will Parker cause more conflict for Kristina (Lexi Ainsworth)?  Stay tuned.

Share your well-wishes for Ashley and her growing family in the comment section below! Then let us know if you are looking forward to Parker’s next appearance on GH and what it may mean for Kristina!

Hallelujah! GH Welcomes Michael Easton Back To The Party: Watch The Promo!

Congrats Ashley Jones, you are a wonderful actress. I read that Ashley is pregnant on people.com. she is 39 years old, wow baby boy. So happy for her.

Congratulation to Ashley! One question, though: I’m not behind in viewing GH and have not seen her on but once. Has she been on more times?

correct… that’s all I recall….

is Kristina a lesbian ??? I hope this… only if Ashley Parker is on for the long haul….

but.. if she’s pregnant… perhaps they can write this in to storyline ?

Otherwise… I had posted… that I think Ashley Jones would make a great !!!! Sami recast on DAYS

I can’t wait till she’s back on GH as Parker and in scenes with Kristina.

Off topic: Good morning Michael. Are you gonna post the latest ratings report?