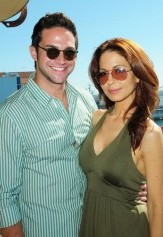 General Hospital’s, Johnny Zacchara is out for revenge on Sonny Corinthos.  However, Johnny just got shot by the man he loathes so much!  And, its all in the name of Johnny Z’s thirst for payback to the mob kingpin for the murder of his sister, Claudia.  The actor who plays this very special type of soap opera mobster anti-hero, Brandon Barash, spoke with TV Guide Canada’s, Nelson Branco in a new interview out today.  In it, Barash discusses Johnny’s loves,  his vendetta’s, and much more.   Here are a few excerpts about Johnny’s romances with Olivia and Lulu!

Brandon on when the character of Johnny began to resonate with the audience, which seems to with his romance with Olivia (Lisa LoCicero): “He (Johnny) was only intended to be on the show for three months. In fact, they were going to kill me off but they decided to keep Johnny around. It was a big effort on my behalf and on the writers’ part to make him as human as possible instead of a [one-note] twisted, demonic guy. The Lulu relationship helped Johnny a lot, but when he was paired with Olivia, that love story lifted both characters off the page quite a bit. Lisa’s incredible and refreshing to work with. If we have to do five takes, we’ll do it five different ways. She’s incredibly professional and always has her [crap] down. It’s a lot of fun to play with Lisa every day.”

Brandon on how he would feel if in the next phase in a relationship with Lulu , they could be more of each other’s confidantes:  “Oh my God — I think they should! I mean Johnny was ready to go to the electric chair for this girl! And they’ve said about two words to each other since they broke up. They should be friends. Even beyond that, there should be some kind of double date with Johnny, Olivia, Lulu and Dante. There’s a lot of room for so much comedy with [that equation].”

Get Ready for the "What If" finale with Michael Easton and Kelly Monaco!