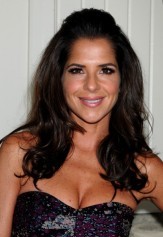 In a new interview out from Insider.com, General Hospital and Dirty Soap’s, Kelly Monaco  talks about the current state of daytime soaps, plus the drama on E’s! new reality series featuring her and some of daytime’s most notable young stars.  Here are some excerpts below from the conversation with Kelly on her relationship with high school sweetheart, Michael Gonzalez, the ongoing friendship drama between Kirsten Storms and Farah Fath, and life in a shrinking genre.

Kelly on the mood at the GH set nowadays! “It’s a sink or swim kind of attitude at work right now. We’re all pretty realistic about the state of daytime and the generation of this genre. We’re trying to keep it on the air, and everyone, from top to bottom, is stepping up to put our best foot-forward. We have got to make people tune in and save daytime. We’re very aware that we could be pulled at any time, it’s the reality of the times. But we’re hoping to make daytime cool for a generation that may not know we exist.”

Kelly on her thoughts on why Kirsten and Farah’s relationship went south as illustrated on Dirty Soap! : “It’s so weird that it’s so unclear what went wrong. I feel like both of them are still kind of shadowing the real problem because, from my stand point as a logical human being looking at it, I can’t see where the issue is. Did they just grow apart or did something sabotage the relationship? I feel like there’s something underneath the covers that isn’t being shown. I would love to see them be real about what happened. You don’t just fall apart like that without something big happening. It seems like something more substantial had to have happened to ruin such a dear close friendship. I don’t know what the f*** is going on with these girls [laughs].”

Kelly on letting her personal relationship with Mike Gonzalez being documented on the reality series:  “I’m pretty aware of what I’m allowing out there. I’ve allowed my experience with my relationship to become public because I am in a healthier place with it and think people can really relate to my struggles. It seems shameful to have a platform to discuss and heal and evolve but not use it. We all go through it, this may be to the extreme, but it happens to everyone.”

So what do you think of the drama between Farah and Kirsten and Kelly and Michael? Let us know.

Catherine Hickland set for return to OLTL as Lindsay Rappaport!

farrah seems very catty and paranoid, and insecure, and her two guy friends are really arrogant and toxic, I really thought she was a more positive person but the show makes her come across as insecure w/ the people around her. and the way she is w/ her boyfriends mom just speaks volume on her.

I agree with Kelly, that there must be more than meets the eye going on between Kirsten and Farah. I like both Kirsten and Farah, but feel that Farah did initiate some type of communication, and Kirsten blew it off. Maybe she had good reason for doing that, I don’t know. Farah did seem quite genuine this week in her concern for Kirsten’s well being. I hope they patch things up. Longtime friendships don’t come along everyday, and are certainly worth patching up – if possible. As for Kelly, I also like her, and feel she was quite brave and… Read more »

I’m finding the show fascinatin and addictive. Well we all want to know what goes on behind closed doors and here we are. I love Kelly, Galen n Jenna and Nadia n Brandon esp. J P you need to grow up and as for Kirsten n Farah, I also think something major happened and we may just find out. Farah’s two gay friends need to butt out. I’ve always thought that Kirsten’s may be bipolar. I know she has huge trust issues. Can’t wait to see more. Maybe adding to the cast and finding someone better for Farah?

HATE Dirty Soap. Hate all Reality Television because it is just a load of cheap, crass, bunk.

I really enjoy watching Dirty Soap. I think Kelly is a great person. I think Farrah and JP make a great couple. Loved them on One Life also. Hope Kristen gets better fast.

I like Dirty Soap. Great reality show for soap fans. Wish everyone on the show well and thank them for sharing their lives off the shows with us.

Can’t imagine my workout without GH! Love the GH cast and Dirty Soap has even made it better!