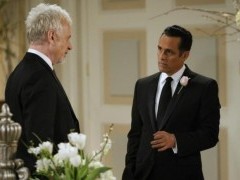 If you tuned into see Sonny and Brenda’s wedding on General Hospital this week, you were privy to watching one of the great actors of the genre at the top of his game.  We can only be talking about Sonny Corinthos himself, Maurice Benard. First, in the scenes when the couple finally are set to say their, “I do’s”, Brenda confesses her lie about Dante and her baby as sort of an intervention before Carly does!  And as Brenda turns and starts to walk out of the wedding, Sonny stops her. It is there, that Maurice Benard was at his best, delivering a powerful, emotional, and heartfelt speech to his beloved Brenda to stay and marry him while drudging up the scars of her childhood with her father, and their past together to illustrate to her that in the end that he loves her, and can past her deception. Later as the couple goes through the ceremony, even without saying many words, Benard was strong, caring, and loving to Brenda.   It was “grab a hankie” time for sure.

But this was a more than a one episode performance for Benard; he was great all the rest of the week too! And it culminated on Friday’s episode after Brenda is “supposedly” blown-up in a car eerily similar to Sonny’s late wife, Lily Rivera who suffered the same “fate”.

As Sonny is rocked to the core that Brenda was in the explosion, Benard showed us Sonny’s pain, rage, anger, and helplessness. Who could not help but seeing the little boy in Sonny when he desperately needed hugs from Jason and Robin! Then, when Jax told Sonny to pull the trigger and shoot himself to spare everyone more death and destruction, Benard showed even another layer to his subtle performance.

So, with all that mentioned above and more, On-Air On-Soaps names Maurice Benard this week’s Power Performance of the Week. Below watch the video clips of Sonny and Brenda’s wedding clips from Tuesday’s episode and then Sonny moment’s from Friday’s episode! Enjoy and we reiterate, ya better grab for your hankies!

Agreed! A phenomenal performance and should be an Emmy winner!

I agree with you,Michael. Maurice finally got a story where he he could prove how great he is and has been for so many years. The writers finally gave him the dramatic moments where he showed every emotion possible . His senstivity, and horror to relive what happened to Lily was unimaginable. But, he did not go off the deep end. He was grief stricken and yet controlled. In other words, he was brilliant. I can’t wait for Mondays episode. There is defnitely more to come. We know the body found was not Brenda, but Sam’s. He she still alive??… Read more »