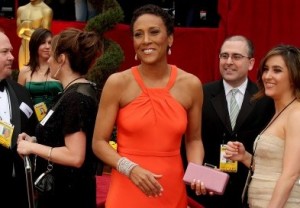 Add Robin Roberts to the list of celebrities who in 2013 officially came out!  The Good Morning America co-anchor posted a touching message on her facebook page which was prompted by the fact that a year earlier, in 2012, she reached an important 100 day-milestone after undergoing a blood marrow transplant, and she reflected on how grateful she was for the people in her life.

I am grateful for my sister, Sally-Ann, for being my donor and giving me the gift of life.  I am grateful for my entire family, my long time girlfriend, Amber, and friends as we prepare to celebrate a glorious new year together.  I am grateful for the many prayers and well wishes for my recovery. I return every one of them to you 100 fold. On this last Sunday of 2013 I encourage you to reflect on what you are grateful for too.  Wishing you a Healthy and Happy New Year. Peace, love, and blessings to all..XO”

READ MORE
Y&R Serves Up 'GC Buzz' With a Twist

According to an ABC spokesperson, Roberts longtime girlfriend was revealed to be Amber Laign, a massage therapist in private practice originally from the Bay Area, and noted that the two had met through mutual friends. Laign specializes in helping people recovering from injuries.

Of note is Roberts recognizing her girlfriend just days over anti-gay remarks made by Phil Robertson, of  A&E’s reality series “Duck Dynasty.”   According to Variety: During an interview with GQ, Robertson cast aspersions on people in same-sex relationships and African-Americans, prompting a suspension by the cabler’s parent, A+E Networks, and a quick reversal of the decision – drawing anger from supporters of both Robertson and the groups he offended.  As co-host of what is arguably the nation’s favorite morning program, Roberts may help fuel more discussion and debate in this latest clash of cultural values.”

It is also worth-noting that it was Roberts who interviewed President Barack Obama, when he came forth with his stance in support of  gay marriage.

What do you think Roberts coming out?  Weigh-in!

On DAYS It's a New Year's EJami Showdown! Will EJ Blackmail Sami Into Marrying Him?

No surprise. Have wondered for a long time why she never did. It does not make her any less a human nor does it make me less in awe of her for what she has been through and how she handled the past 18 mo of her life. If we could all take a page from her journey.

I am happy for Robin. It is not surprising that she hesitated to do so. Many people will understand why she waited.

Good on her. It’s much nicer to be out when its safe and comfortable with who you (and your partner) are to each other as a family unit, particularly if part of your life is very much in the public eye. IAthough I’ve been out for nearly 20yrs it does give courage to some who haven’t or can’t be at the moment. All the best to them.

I wish Roberts good health and a good year, but I wish people’s sexual orientations would stop being news. I really don’t care who’s sleeping with whom. And while we’re at it, stop giving attention to people like Phil Robertson. Last I checked, he doesn’t speak for God.

Don’t really care. A long as she’s healthy, that’s all that matters. She’s a lovely lady – even if she does work for ABC/Disney!

YOU GO ROBIN!!!!! With all that you have been thru you should be happy along with healthy. I wish you only the best for 2014 and many more years to come.

I always felt that Robin Roberts had a mad crush on Oprah ….

I always felt Oprah has her own GAILfriend…im just joking around here!!!

She came out when she was ready. Afterall she’s been through, this isn’t a big thing to me.

I’ve always admired her nothing has changed. Well maybe it has after the Duck thing if anything I give her kudos for stepping up to the plate after the horrible things he said about people he don’t know.

Robin, you are so talented. Your sexual preferences have nothing to do with how well you carry yourself. No, I am not gay but so what that you are. You do what makes you happy. Let them talk. There going to talk anyway. Be happy and live every day to the fullest.

No offense to Michael Fairman, but I long for the day when news like this isn’t even published. I’m not sure why peoples sexuality is newsworthy, and hopefully one day it won’t be and won’t even be printed.

She’s a lovely lady and am thankful she is happy and healthy and a wonderful example for many.

I am so happy for her!!! Mental health experts I read articles from, always say it’s a mental, physical and emotional burden when we keep a vital part of ourselves hidden and when we finally bring that part out to the light it’s like a rebirth of who we truly are.

Who cares? And I mean that in a good way. She’s got positive energy, is a great newscaster, and is kind every day. We need more people like her in this world.

I never even thought about it ~ I just know she is excellent at her job and I watch her every morning while getting ready for work, even though other than that I do NOT watch the ABC-TV Network – I’m usually at work anyway.
Someday, “news” like this won’t even cause anyone to blink an eye.

I love robin, she is a terrific classy sassy lady. We all knew, she was a lesbian. not a surprise at all. i came out of the closet 3 years ago, now i can live my life, with no secrets and baggage. i have a wonderful boyfriend. im 24. my boyfriend is 35 and he is one hot man. lol. julian jerome is my male crush fantasy. lol. william is one hot masculine man. I JUST LOVE HIM. HE IS A WONDERFUL ACTOR. MY BOYFRIEND IS MASCULINE TOO. HAPPY NEW YEAR EVERYONE.

Uhh, thanks for sharing…??

Im so proud of robin, she is a nice down to earth lady. Now oprah winfrey needs to come out of the closet. i knew robin was gay, My gay dar was right. LOL.

It’s not a lifestyle I agree with, does that make me a hater, no, it’s my religious beliefs. I do not hate the person, but, I don’t agree with the lifestyle. Nor do I view Ms. Robertson in a lesser light because of my beliefs. Ms. Robertson, from all accounts, is indeed a brave and courageous person and excellent journalist….I do wish her the best and good health.

I’m happy Robin is healthy. While her sexual orientation was not “public news” many have been aware of it for years. I’m glad she has come out because it’s important for LGBT people, people of color and people in general to have role models. At the same time, I don’t think anyone has to label themselves unless that is something they want to do. Straight people don’t have to declare their sexual orientation & I believe LGBTs shouldn’t have to either.

I send best wishes for continued good health and thanks to Robin for sharing yet another part of her life with us woth much love and gratitude.

It is great that Robin can be open and honest about who she loves and who she is. Amen to a Robin. Wish her all the best. Hopefully, this will help young people in the LGBT community who are struggling or being bullied feel stronger.

I don’t get it. After Amber sticking with her through everything, why did she wait until now to acknowledge her? They followed her around with cameras through it all so why didn’t they show Amber then? Why now? Amber deserved better.

READ MORE
OLTL's Erika Slezak Message To Her Fans During COVID-19: "I Hope Everyone is Well and That We Come Out of This In One Piece"
Continue Reading
Advertisement