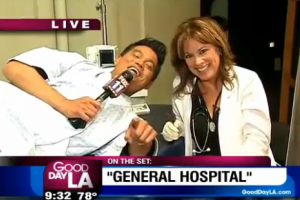 Today on the morning show Good Day L.A. reporter Bobby Decastro caught up with General Hospital stars Maurice Benard (Sonny), along with a brief appearance by Bradford Anderson (Spinelli)  in one segment,  and then later with Nancy Lee Grahn (Alexis), all on the set at GH!  Good Day L.A.  anchors Steve Edwards and Jillian Reynolds commented from their studio post on the fun as well!

Good Day L.A. was at GH to remind viewers of the the timeslot change today  (one hour earlier) and to find out what is coming up as the series, as it heads towards its 50th Anniversary next year.

During the segments,  fans got a glimpse into the making of Sonny and Kate’s upcoming nuptials!  Now, will those come off with out a hitch?  Well, if history is any indication, when Sonny and Kate have tried to get married in the past, things have not gone so smoothly!

Nancy Lee Grahn who was hilarious in her segment, donned a doctors white lab coat, and when asked what she plays on GH retorted, “I’m a  lawyer, but due to budget cuts now, we have to multi-task!”   Grahn gave props to the shows new direction under EP Frank Valentini stating, “It was a little perilous for awhile.  Then there was a network shift, a writing shift, a producer shift, and then everything shifted, and we are diverted. We are looking at the iceberg from behind us now.”

After the jump, watch the video segments from Good Day L.A. and let us know if you are excited to see what will happen when Sonny and Kate head down the aisle, one mo’ time!

As GH Is On The Move Today, Maurice Benard Says Of Cartini: "They''ve Been Able To Make This Show Into An Ensemble!"

Thank you Thank you! I love GH great to see Alexis & Sonny. Sorry Sonny did make love to you on

Wow pretty something for FOX to promote an ABC show!

Just wanted to say thanks Michael for the video’s…I was going to DVR GoodDay LA yesterday but forgot & had to go to work..so I got to see it any way..thanks..