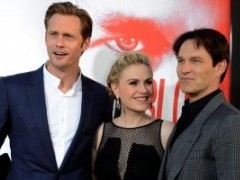 Great news vamp fans! HBO’s sexy and soap-alicious True Blood has been renewed for a sixth season!  The news came today from HBO.   According to The Huffington Post,  “There’s no word yet on a premiere date or whether series star Anna Paquin’s (Sookie) pregnancy will affect shooting of the new season.”   Anna and her True Blood co-star, Stephen Moyer are expecting twins!

True Blood has been a ratings winner for HBO. The premiere episode on June 10, 2012 had 5.2 million viewers. The most recent episode nabbed 4.7 million viewers. Season six of  True Blood will be missing one key player: series creator and executive producer Alan Ball. He’ll step down as showrunner, but will still serve as special adviser to the series.

Are you glad about the pick-up of a season six? Let us know!

Joanna Johnson Leaving B&B As She Is Unavailable To Tape More Episodes! However, Crystal Chappell Remains!

Does this mean our Diane won’t be coming back any time soon?

Who is JD’s mistress in the wolf pack? She rocks and is quite hot! Would like to see and HEAR more from her.

LOVE THE SHOW WISH SOOKIE WOULD GET BACK TO BILL OR ERIC OR ALCIEDE ITS JUST GOOD SHOW!!