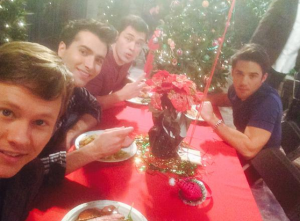 It’s that time of the year when even your favorite soap stars get to unwind ( just for a few weeks though, then its back to taping!) and celebrate for a year well-done and to share some holiday moments with their acting buddies and loved ones!

Last week on Thursday, the cast of NBC’s Days of our Lives had their annual lunch break Christmas party on the set, and then it was back to work to finish the day.  Guy Wilson (Will) shared a photo on Twitter with some gents including: Freddie Smith (Sonny), Christopher Sean (Paul) and Casey Moss (JJ).

Molly Burnett (Melanie) took to Instagram and showed her party spirit with Eric Martsolf (Brady) and Judi Evans (Adrienne)and a candid photo of Smith and Sean too!

Meanwhile over the weekend it was time for Y&R’s Justin Hartley (Adam) and his girlfriend, former DAYS and AMC Star Chrishell Stause’s holiday party where bestie Y&R’s Melissa Claire Egan (Chelsea) got in on the photo action as a play on the fact that Melissa is the love interest of Justin’s in Genoa City.

It happened in this posting by Chrishell via Instragram: when she posted: “Who is this Chelsea girl I keep hearing about??!!#YR#FatalAttraction

Check out below additional party pictures as mentioned above in the post! Then let us know which holiday pic/image is your favorite?

Ok. Serena was carrying a large pile of files in the hospital when she ran into Daniel. FILES ??? Most info is on computers these days. Get with the times, DAYS !!!

What does that have to do with the pictures above??

Nothing at all. At least I got the right soap. LOL

Thank you, CeeCee; the same to you. But Serena is doing research, not data entry.

Who is that next to Molly and can’t think of his name, the guy who plays Eric, in the photo above?

My question is are they eating off paper plates? Days is cheap with the sets and clothes.