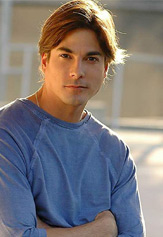 So could this finally be the right time for fan favorite Bryan Dattilo (Lucas) to return to the Salem fold?  For all intent and purposes it would seem the timing couldn’t be better, as over the next several months the Horton family be dealing with Will’s (Chandler Massey) coming out, as the character tries to come to terms with this within himself.

It would be interesting to see how the writers decide to write the character of Lucas in this scenario and his reaction to the news that his son, Will, is  gay. Would Lucas be the supportive dad, or the homophobe?

In any case, Soap Opera Digest is reporting that Datillo was spotted earlier this week at the set of Days of our Lives at NBC Studios!

So let us know if you would be excited for a Lucas return? And if so, how would you like to see him deal with his son’s sexuality?

The Chew vs. All My Children … So which show has won the Ratings War?