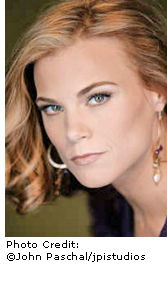 Could double Daytime Emmy award winner, Gina Tognoni being heading back to One Life come fall? Now that her run on CBS’s “Guiding Light” is about to come to an end?  If you look back at an interview with On-Air On-Soaps from New Year’s eve 2008, the actress intimated a shift back to Llanview may be something she might entertain. “Kelly was kind of zany, and that character you could just write for forever. “OLTL” is such a great show. I am a big fan of executive producer, Frank Valentini.  I have always had a huge soft spot for that show.”

Now in today’s Suds Report, TV Guide Canada’s Nelson Branco revealed his blind item from last week had to do with Togoni! “Sources close to Gina Tognoni say that the Emmy winner is thisc lose to signing a contract with One Life to return as Kelly Cramer Buchanan. “She turned down two offers from CBS soaps,” says an insider. The buzz is the other two soaps were Y&R and B&B. Is this a bad move on Tognoni’s part considering One Life may not be on the air in three years? “No, she wants to stay in New York with her new husband,” continues the mole. Look for the actress on the ABC soap sometime later this fall if all goes according to plan.”

Speaking of another related One Life item from the Suds Report, Branco stated the following about the Stacy/Rex/Gigi story that is driving us all into an early grave.  “Who else stood up from their couch and screamed, “Me! Me! Me! I’ll do it!” when that fiasco, Stacy, asked Stan to punch her in the face? And I would have taken a few takes, too, just to get the shot right, you know. I’m a perfectionist. Can we recast Stacy with Justis Bolding? Yep, that’s how much I despise Crystal Hunt’s performance. I blame Stacy and Stacy only for One Life‘s recent ratings woes. Kill the bitch.”  On-Air On-Soaps could not agree more!