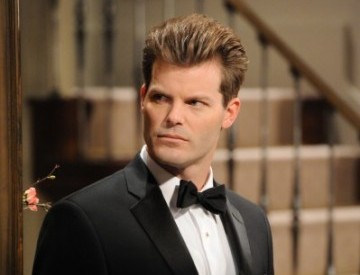 On last night’s edition of the BlogTalk Radio series, TOLN Soaps Live with Michael Fairman, All My Children’s Julia Barr (Brooke), Rob Scott Wilson (Pete) and Ryan Bittle (JR) took part in a broadcast centering around the Chandler Media Gala, where the trio talked about all the events surrounding their characters hot storylines unraveling during the big event featuring the entire cast!

When asked by Michael, if JR (who is quickly becoming addicted to performance enhancing drugs (PED) or steroids from his explosive temper, frequent injections, and stealing a prescription from Cara’s prescription pad) is becoming the A-Rod of Pine Valley? Ryan Bittle responded, “The A-Rod of Pine Valley? (Laughs) That is saying something! I think it’s great, who wouldn’t? (Laughs) When I was first approached about this role, I was very excited when I learned about this character. The writing staff did such a wonderful job of putting together so many great moments for him, and it’s never dull.  So, I actually enjoy it.  It’s quite a blast.  And, I remember, I have had to pull my pants down several times on set, and it was quite interesting, and as long as Ryan doesn’t get suspended for 211 episodes, we are going to be OK! (Laughs)”

Julia Barr also related how she feels about what looks to be a potential new love interest for Brooke in Dimitri Marick (Michael Nader)! The Daytime Emmy winner said she was shocked on Nader’s return to AMC:  “I am reading a script and it says, ‘Brooke goes to the door,’ and she is in the Chandler mansion and she opens the door and goes, ‘Oh, my God.  I never thought I would see you again!’  Now, this is Julia reading the script, and I am like, ‘Who is at the door?  I immediately called our EP, Ginger Smith and went, ‘Who is at the door?’ She goes, ‘I can’t tell you yet!  I go, ‘Oh, my God.  So a couple of days later, Ginger says, ‘We think who is going to be at the door is Michael Nader! And I said, ‘I can’t believe it!’  Michael hadn’t been on the show for ten years and he moved out west.  But she enticed him, and he showed up, and we are having a great time. I love him dearly. We have been around enough to not get to uptight about things, and yet we care, and have a great time playing off one another.  I think it was great that they brought him back. ”

Now as to the very bizarre looks Opal (Jill Larson) gave Celia (Jordan Lane Price), when she entered the Chandler Media Gala via the red carpet (and then seemingly wanted to keep her son Pete away from the gal he carries a torch for), fans have been speculating all week long, that perhaps there is a twist coming! Could Pete and Celia actually be half-brother and sister?  Rob Scott Wilson would only offer up this:  “I have no words for that! But Pete and Celia have kissed quite a few times so that would be kind of awkward.  Hey listen, I will go with whatever, but keeps Pete Cortlandt’s name clean!  (Laughs) ”

Listen to TOLN Soaps Live with Michael Fairman and the stars of All My Children below, which also includes the scenes named as the “Power Moments of the Week” from One Life to Live! And if you are a Roger Howarth fan, you will want to hear the choices, as well as the ‘Power Moments’ from this week’s All My Children.  Plus, one lucky caller was the recipient of an AMC cast signed poster and a three-month subscription to Hulu Plus for getting our AMC trivia contest questions all correct!

What did you think of the TOLN Soaps Live episode? Do you think JR is becoming the A-Rod of Pine Valley? Do you like the idea of Brooke and Dimiti as a couple?  And, what on earth is going on with who Celia is related to?  Share your thoughts!

Joy Behar's Last Words! After 16 Years She Signs-Off On THE VIEW- Watch The Video!

amc’s jr is a rod of pine valley? Did jr date non vocalist and worst actress madonna who then ruined his career? That’s the running joke among sports world that madonna destroys every athlete she dates. Sports and pop music think madonna’s a joke. Giggles. Sports media much like mainstream media and entertainment press tend to hate on athletes of color and actors of color a lot more than white athletes and white actors. It’s typical of sports media w/ how much hatred a rod is getting from them compared to lance armstrong. And yet armstrong was much worse bec… Read more »

I’ve waited this long to speak about Ryan Bittle. JR.

handsome man he is: I wait his response. LOL…. tease… hot… tantalizing… smokin’.

He got me in the mix.