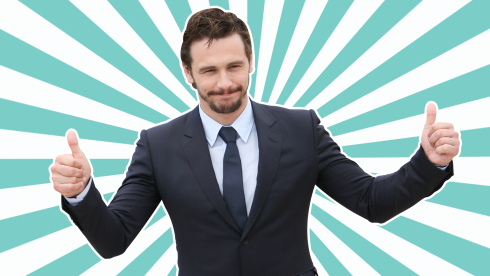 And chalk up reality or unscripted television series for over-achiever, the talented James Franco.  The original “Franco” of General Hospital has just signed a deal with Ovation TV to bring a look into his artistic life!

According to Variety, “The prolific actor/writer/director/teacher and all-around polymath will star and executive produce an unscripted series in which he’ll explore his many personal artistic pursuits and passions. Ten hour-long episodes of James Franco Presents will premiere in November on cable network Ovation.”

The series will, “Pull back the curtain on the many side projects James Franco is perpetually involved with, from his latest art exhibit to his work in collegiate classrooms. The series will give viewers a glimpse at highlights of the hundreds of hours of video he’s shot over the years that’s never been seen before, including some of his experimental short films. In addition to plumbing his past work, Franco will also let cameras tag along in other facets of his professional life as well.” Ovation CCO Robert Weiss characterized “Presents” not as a reality show but an “anthology docuseries.”  “The show sees the word of art through James’ eyes,” he said. “All the different exploits that James is involved in, this show encompasses.”  While Franco appears in every episode as the host introducing each segment, his screen time will vary depending on how much he himself is a subject of each hour.

“Presents” marks Franco’s first primetime series since his breakthrough role on the NBC dramedy Freaks & Geeks, which bowed in 1999. He’s kept busy in other dayparts, having made notable appearances as varied as  The Academy Awards, General Hospital  and Saturday Night Live.

So, will you be checking out Mr. Franco on his new show this November? Does it sound intriguing to you? Let us know!

I don’t see why he’d get his own show.

as long as he’s not involved with wannabe jfp and steve burton, he should be ok!

Oh aria I wish he would bring them on board and then maybe I could have my Y&R back.

I will, sounds great. I would love a peak inside this guys mind. What a talented guy.

I love James Franco….what a great talent. I’d love to know his IQ

James Franco is multi-talented. And bizarrely creative. Might tune iin once out of curiosity…if it’s good…them I’m in.

Can he puh-LEEEESE invite RoHo to co-host with him so that we can get rid of Franco and the efforts to rewrite that story line!